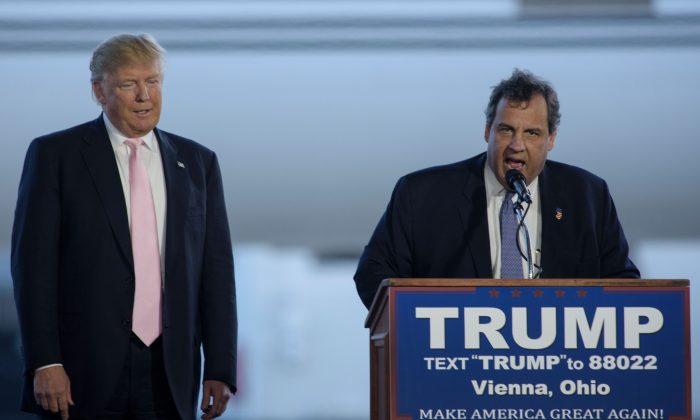 Donald Trump announced that New Jersey Governor Chris Christie is the chairman of a transition team which will prepare his campaign for the general election in November.

The presumptive nominee is looking to switch gears after his Republican rivals Ted Cruz and John Kasich dropped out of the race following a decisive Trump victory in the Indiana primaries.

“Governor Christie is an extremely knowledgeable and loyal person with the tools and resources to put together an unparalleled Transition Team, one that will be prepared to take over the White House when we win in November. I am grateful to Governor Christie for his contributions to this movement,” Trump said in a statement.

Christie quickly followed up, accepting the position and reiterating his support for the presumptive nominee.

“I am honored by the confidence being placed in me by Mr. Trump and look forward to putting together a first rate team to assemble an administration to help best serve the President-elect and the nation,” Christie said in a statement.

Christie was one of the first public officials to endorse the presumptive nominee, stumping for Trump and often seen at his side for celebration speeches.

As Time points out, it is extremely early in the campaign to name a Transition Team, Barack Obama didn’t name his team until November of 2008. But as his statement lays out, this is part of a wider strategy to push towards a general election strategy of unifying the Republican party.

“Mr. Trump has begun shifting towards a general election strategy and implementing an infrastructure capable of securing a victory including making key hires, building a finance operation to benefit the Republican Party and unifying the party by working with several Republican leaders now voicing their support for Mr. Trump and his candidacy,” his statement says.

The announcement comes following a New York Times article that Trump’s son-in-law, Jared Kushner, would be working with Corey Lewandowski, the Trump campaign manager, and Paul Manafort, a senior adviser, to set up a general election team.

It also comes amid reports of a conflicted Republican party hesitant to endorse Trump, even after he solidified the Republican nomination. For example, Speaker of the House Paul Ryan, a notable party leader, is “not ready” to support the presumptive nominee, which is perceived as a split in the party.