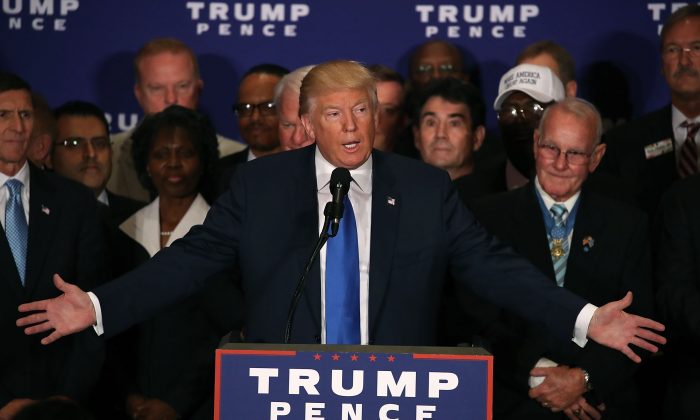 After years of questioning whether President Barack Obama was born in the United States, Donald Trump conceded on Friday that he was, but gave no explanation for his change of heart before leaving the stage.

“Hillary Clinton in her campaign of 2008 started the ‘birther’ controversy. I finished it,” Trump said at a campaign event in Washington.

“President Barack Obama was born in the United States, period,” he continued. “Now we all want to get back to making America strong and great again.”

Trump left the stage following the statement, ignoring questions from journalists at the event originally billed as a press conference. Instead, the first 25 minutes of the event were dedicated to veterans making their case as to why Trump would be a good commander-in-chief.

The statement is a reversal on a long-held belief, and his claims that Clinton started the birther movement were denied by the Clinton campaign.

The claim that Clinton started the birther movement has roots in the 2008 Clinton primary campaign where Clinton supporters passed around a memo questioning whether Barack Obama was born in Hawaii. The candidate herself never addressed the topic.

The memo, according to a report in the Telegraph, said “Barack Obama’s mother was living in Kenya with his Arab-African father late in her pregnancy. She was not allowed to travel by plane then, so Barack Obama was born there and his mother then took him to Hawaii to register his birth.”

“I have people that have been studying [Obama’s birth certificate] and they cannot believe what they’re finding … I would like to have him show his birth certificate, and can I be honest with you, I hope he can,” Trump said on NBC’s “Today Show” in April 2011.”

Shortly after that, Obama released his long form birth certificate. However, Trump continued questioning the president’s birthright leading up to the 2012 election and into Obama’s second term.

In August 2012 he quoted an anonymous but ‘credible’ source that called his office.

“An ‘extremely credible source’ has called my office and told me that @BarackObama‘s birth certificate is a fraud,” he tweeted.

In 2013 he continued questioning the validity of the certificate:

Leading up the press conference, the Trump campaign has been softening the birtherism message. Kellyanne Conway told CNN’s Chris Cuomo on Nov. 9 that Trump “believes President Obama was born here.”

Trump surrogate Ben Carson said on Sept. 6 that both sides—Clinton and Trump—should apologize for the birther movement.

Obama responded on Friday to the remarks made by Trump.

“I was pretty confident about where I was born. I think most people were as well,” he told the press. “I would hope that the Presidential election reflects more serious issues than that.”