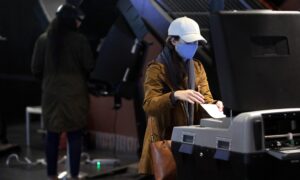 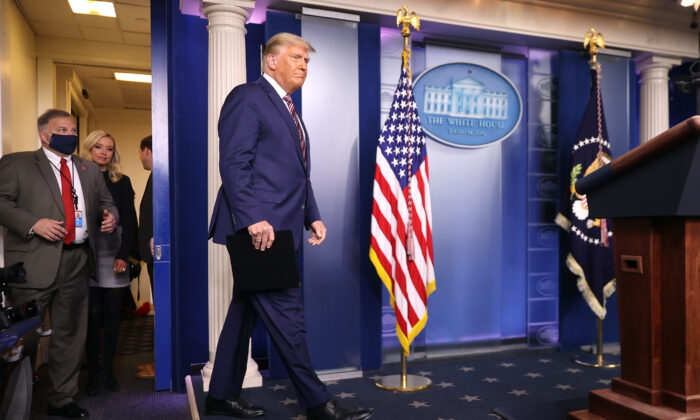 President Donald Trump arrives to speak in the briefing room at the White House on Nov. 5, 2020. (Chip Somodevilla/Getty Images)
2020 Election

The Trump campaign filed a lawsuit in Nevada and ramped up the fight for adequate observer access in Pennsylvania on Nov. 5 as these and four other contested states continued to tally votes that would decide the winner of the 2020 presidential election.

Trump campaign representatives in Philadelphia said officials at the local ballot processing facility defied a court order by moving ballot machines to the back of the building and out of sight of the observers gathered behind a barricade. The campaign accused Philadelphia’s Democrat sheriff of refusing to enforce the order.

Pam Bondi, a Trump campaign associate and a former Florida attorney general, told reporters gathered outside the Pennsylvania Convention Center on Nov. 3 that the campaign would seek additional legal recourse. The campaign filed a lawsuit later in the day against the Philadelphia County Board of Elections seeking an emergency injunction and a halt to the count.

“They are still not in compliance,” Bondi said. “It’s unbelievable what they are trying to do to our votes that have been legally cast.

“They are defying a court order by a judge and this is not the last of this.”

The office of Philadelphia Sheriff Rochelle Bilal, a Democrat, didn’t immediately respond to a voicemail left with the office of its public information officer.

Trump added that he will “defend the integrity of this election,” citing its importance. “They’re trying to rig an election,” he said, arguing that Detroit and Philadelphia Democrats are trying to “engineer the outcome of a presidential race.”

Trump noted that he’s won in Iowa, Indiana, Ohio, and Florida amid “historic interference from big media, big money, and big tech” as well as “suppression polls.” He cited polls from agencies that had showed him 17 points behind Biden in Wisconsin. So far, data shows Biden ahead by only about 20,000 votes.

“Mail-in ballots are a disaster,” he said. “We can’t be disgraced by having something like this.”

Trump campaign officials said on Nov. 4 that observers had been forced to watch ballots being counted from as far away as 100 feet.

The Philadelphia City Commissioners said in a statement that the vote count was resuming just after noon, following “a brief pause” in light of the ongoing litigation.

“It has resumed in accordance with the law,” the statement read.

The city appealed the ruling to the Pennsylvania Supreme Court.

According to the appeal, Cannon’s ruling “is wrong, and because it jeopardizes both the safety of the City Defendants’ canvass, plus the privacy of voters, immediate allowance of appeal is warranted.”

A spokeswoman for the court didn’t immediately respond to an inquiry.

President Donald Trump, Attorney General William Barr, and scores of prominent Republicans had warned long before the election that the flood of mail-in ballots would cause delays in vote counting and is vulnerable to fraud.

Earlier the same day, the Trump campaign filed a lawsuit in Nevada alleging that 10,000 votes in the state were cast by voters who no longer lived there.

Trump campaign representatives in a press conference said that observers hadn’t been granted adequate access to watch the vote count. A day earlier, Nov. 4, the Nevada Republican Party also said that it has received “thousands of complaints” by voters with issues during the election.

Clark County Registrar of Voters Joe Gloria told FOX4 that he hasn’t received any complaints from the GOP.

“Other than issues in the polling place regarding some of their observers,” said Gloria, “we addressed them where we could. But no I haven’t had anything provided to me.”

The Associated Press and other news outlets haven’t declared a winner in the state. As of 4:55 p.m. EST on Nov. 5, former Vice President Joe Biden led Trump by 11,438 votes. Biden’s lead expanded from a day earlier, when he led by over 7,600 votes.

Nevada won’t complete the processing of the bulk of its ballots until Nov. 12, according to a Clark County official. That’s the final date that votes can be counted in the state.

Clark County, which includes the city of Las Vegas, is home to most of the state’s population.

“We won’t complete until November 12,” Gloria said. “Our goal here in Clark County is not to count fast.

“We want to make sure we’re being accurate.”

If Biden were to secure wins in Nevada and Arizona, he would reach 270 electoral votes and the White House in the 2020 election. Both states were still counting votes as of the evening of Nov. 5.

Biden’s lead in Arizona slipped on Nov. 5 as new results were reported from Maricopa County.

While the voting results for Arizona were called early for Biden by several news outlets, including Fox, Phoenix-based data analysis and political consulting firm Data Orbital said the ballots that were still being counted may be heavily Republican, with enough to potentially flip the state for Trump.

Meanwhile, Trump supporters converged on a vote-counting center in Phoenix, chanting “stop the steal!” in reference to the president’s claims of election fraud. Trump has insisted that there were major problems with the voting and the ballot counting, especially with mail-in votes.

Observers from both parties were inside the election center as ballots were processed and counted, and the procedure was live-streamed online. Two top county officials—one a Democrat, the other a Republican—issued a statement expressing concern about “misinformation spreading about the integrity of our elections.”

“An accurate vote takes time,” said the statement signed by Clint Hickman, the GOP chair of the Maricopa County Board of Supervisors, and Democratic Supervisor Steve Gallardo. “This is evidence of democracy, not fraud.”

Judges in Michigan and Georgia on Nov. 5 dismissed lawsuits filed by the Trump campaign a day earlier.

In Georgia, Chatham County Superior Court Judge James Bass made the decision at the close of a roughly one-hour hearing. The campaign alleged that a county was improperly counting ballots that were received after the state’s Election Day deadline. The judge didn’t provide a reason for his decision.

Michigan Judge Cynthia Stephens dismissed a lawsuit filed by the Trump campaign that sought to stop the vote count until Republican observers were granted adequate access to view the processing of ballots.

Stephens said the suit was filed hours before the last ballots were counted and that Secretary of State Jocelyn Benson was the wrong person to sue because she doesn’t control the logistics of local ballot counting.

The campaign claimed that Benson was allowing absentee ballots to be counted without teams of bipartisan observers or challengers.