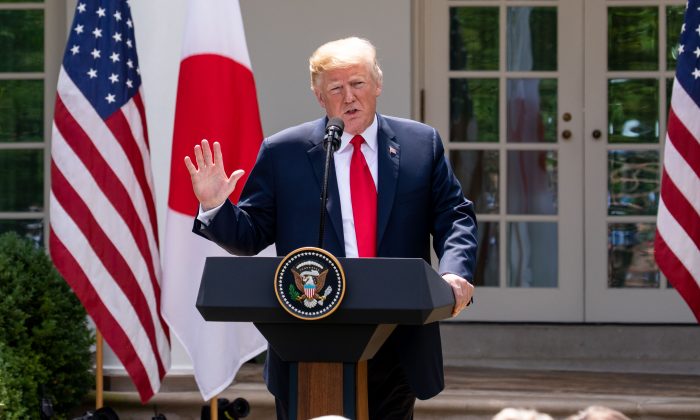 President Donald Trump has called on the leaders of G-7 on Friday to reinstate Russia as a member.

The G-7 was referred to as the G-8 before Russia was expelled as punishment for its annexation of Crimea in 2014.

“Whether you like it or not, and it may not be politically correct, but we have a world to run,” Trump said before departing to the G-7 summit in Canada. “And in the G-7, which used to be the G-8, they threw Russia out. They should let Russia come back in because we should have Russia at the negotiating table.”

Trump said that he has been much tougher on Russia than his opponent in the 2016 election, Hillary Clinton, would have been.

“I love our country. I have been Russia’s worst nightmare,” Trump said.

“But, with that being said, Russia should be in this meeting,” he added. “Why are we having a meeting without Russia being in the meeting.”

Russia was invited to join the United States, Canada, Italy, France, Japan, Germany, and the UK in 1998, turning the G-7 into a G-8. The name changed again in 2014 with Russia’s annexation of Crimea.

The United States considers Crimea a part of Ukraine and view Russia’s annexation as a foreign occupation. Last month, the State Department condemned the construction of a bridge linking Russia and Crimea without Ukraine’s permission. The department sanctioned a long list of people and companies in connection with the annexation.

“Russia’s construction of the bridge serves as a reminder of Russia’s ongoing willingness to flout international law,” State Department Spokesperson Heather Nauert said in a statement on May 15.

Trump flew to the G-7 summit in Quebec, Canada, after making the comments on Russia. He is expected to defend his trade policy and tariffs at the meeting.

The United States imposed tariffs on imported steel and aluminum on several members of the G-7. The leaders of the affected countries said they would introduce counter-measures. Trump aims to renegotiate trade deals so that tariffs are reciprocal. On Friday, he cited Canada’s 270 percent tariff on American milk.