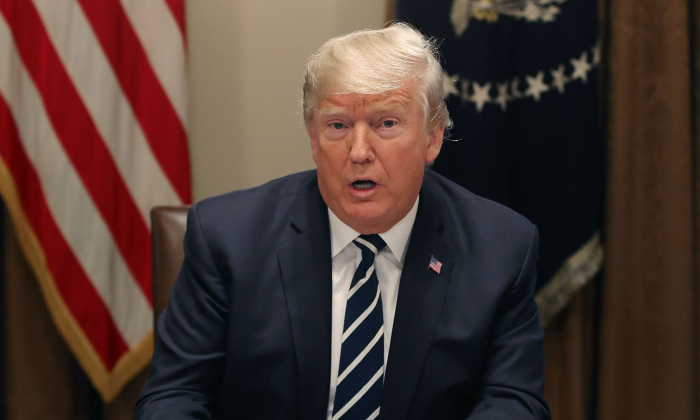 President Donald Trump during a meeting with House Republicans in the Cabinet Room of the White House, on July 17, 2018. (Mark Wilson/Getty Images)
Politics

Trump Blasts Media: When He’s Out of Office, Their Ratings Will ‘Dry Up’

President Donald Trump taunted legacy news outlets, saying their ratings will likely tumble once he is out of office.

Trump wrote on Twitter on July 31: “In 7 years, when I am no longer in office, their ratings will dry up and they will be gone!”

“The Fake News Media is going CRAZY!” he wrote. “They are totally unhinged and in many ways, after witnessing first hand the damage they do to so many innocent and decent people.”

The Fake News Media is going CRAZY! They are totally unhinged and in many ways, after witnessing first hand the damage they do to so many innocent and decent people, I enjoy watching. In 7 years, when I am no longer in office, their ratings will dry up and they will be gone!

His comment on July 31 comes two days after he said he met with New York Times publisher A.G. Sulzberger to discuss the “vast amounts of fake news being put out by the media.”

“Had a very good and interesting meeting at the White House with A.G. Sulzberger, Publisher of the New York Times,” Trump wrote on Twitter. “Spent much time talking about the vast amounts of Fake News being put out by the media & how that Fake News has morphed into phrase, ‘Enemy of the People.’ Sad!”

According to a statement from Sulzberger, the White House invited him to meet with Trump, saying that off-the-record meetings are not unusual and that previous presidents with concerns about their media coverage have done the same. The publisher met with the president on July 20.

After that statement was put out by the Times, Trump went back on Twitter on July 29, saying the news business is endangering people.

“When the media—driven insane by their Trump Derangement Syndrome—reveals internal deliberations of our government, it truly puts the lives of many, not just journalists, at risk! Very unpatriotic!” he wrote. He also said, “I will not allow our great country to be sold out by anti-Trump haters in the dying newspaper industry.”

Last December, Trump told The New York Times that the media will likely embrace him ahead of the 2020 election because it’s in their financial interest to do so. “Another reason that I’m going to win another four years is because newspapers, television, all forms of media will tank if I’m not there because without me, their ratings are going down the tubes,” Trump said.

A June 2018 poll from Axios and SurveyMonkey found that 72 percent of Americans—Republicans, Democrats, and independents—believe that “traditional major news sources report news they know to be fake, false, or purposely misleading.” The finding is in line with other surveys conducted by Pew Research and Gallup.

The poll found that 92 percent of Republicans and conservative-leaning independents think legacy news outlets are intentionally reporting fake news. About 53 percent of Democrats thought the same.