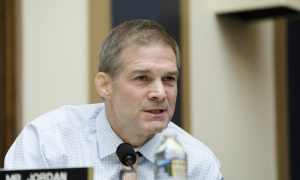 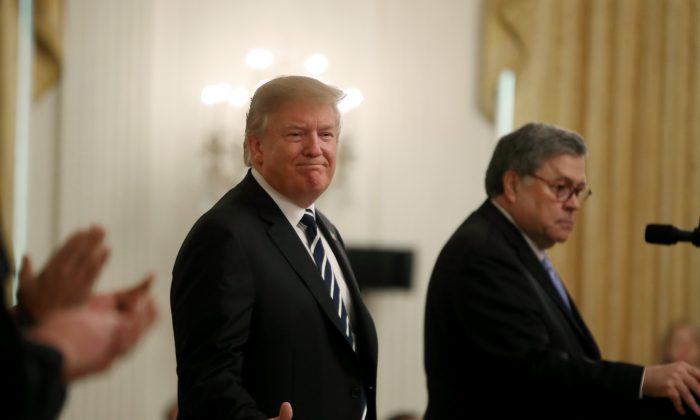 President Donald Trump (L) stands with Attorney General William Barr before the presentation of the Public Safety Officer Medals of Valor in the East Room of the White House on May 22, 2019. (Mark Wilson/Getty Images)
Trump Administration

Taking to Twitter, the president said of the announcement, “Today’s action will help ensure that all Americans learn the truth about the events that occurred, and the actions that were taken, during the last Presidential election and will restore confidence in our public institutions.”

….Today’s action will help ensure that all Americans learn the truth about the events that occurred, and the actions that were taken, during the last Presidential election and will restore confidence in our public institutions.” @PressSec

Trump said that AG Barr has been “delegated full and complete authority to declassify information pertaining to this investigation, in accordance with the long-established standards for handling classified information.”

In a May 23 memo, Trump wrote: “Before exercising this authority, the Attorney General should, to the extent he deems it practicable, consult with the head of the originating intelligence community element or department.”

Trump requested the cooperation of the intelligence community to declassify the relevant documents.

“Today, at the request and recommendation of the Attorney General of the United States, President Donald J. Trump directed the intelligence community to quickly and fully cooperate with the Attorney General’s investigation into surveillance activities during the 2016 Presidential election.

“The Attorney General has also been delegated full and complete authority to declassify information pertaining to this investigation, in accordance with the long-established standards for handling classified information.”

On March 27, Trump had signaled in an exclusive interview with Fox News that he would declassify all documents related to the surveillance of his presidential election campaign by the Obama administration.

Trump explained that he held back from releasing the documents while the special counsel investigation was still ongoing in order to avoid the appearance of obstructing the probe.

The FBI obtained surveillance warrants to spy on at least one former Trump campaign volunteer, Carter Page, beginning in October 2016.

“I have plans to declassify and release. I have plans to absolutely release,” Trump said. “I have some very talented people working for me, lawyers, and they really didn’t want me to do it early on.

“A lot of people wanted me to do it a long time ago. I’m glad I didn’t do it. We got a great result without having to do it, but we will,” the president added.

“One of the reasons that my lawyers didn’t want me to do it, is they said, if I do it, they’ll call it a form of obstruction.”

The documents show that the FBI used the discredited Steele dossier as the basis of the rationale to surveil Page. The bureau failed to disclose that the Steele dossier was funded by the Clinton campaign and the Democratic National Committee (DNC).

Former British spy Christopher Steele compiled the dossier by paying second- and third-hand sources with ties to the Kremlin for information. According to a report by the House Intelligence Committee, Steele was biased against Trump and did not want Trump to be elected president, another fact the FBI failed to disclose in the FISA application, despite being aware of it.

Fusion GPS, the firm that hired Steele to run the Clinton-funded project, peddled the dossier to the media while Steele funneled it to the FBI. The bureau eventually terminated Steele for talking to the media in violation of its policies for confidential human sources.

“When I said there could be somebody spying on my campaign, it went wild out there,” Trump said. “They couldn’t believe I could say such a thing. As it turned out, that was small potatoes compared to what went on.”

“Millions and millions [spent] on the phony dossier, and then they used the dossier to start things. It was a fraud, paid for by Hillary Clinton and the Democrats,” the president added.

Special counsel Robert Mueller took over the FBI investigation based on the intelligence in the dossier in May 2017 and brought it to a conclusion in late March 2019.

Upon its release on April 18, Mueller explained that the probe had failed to uncover any evidence for the main 103 claims made in the dossier—most notably, that though Russia did attempt to interfere in the election, there was no evidence that Trump or any U.S. citizen knowingly conspired or coordinated with the Russian government ahead of the election.

Trump said that following the conclusion of the Mueller probe, it is “now time to look at the other side.”

The Epoch Times’ reporter Ivan Pentchoukov and Bowen Xiao contributed to this report.

FBI Transcripts from Russia Probe May Be A ‘Game Changer’