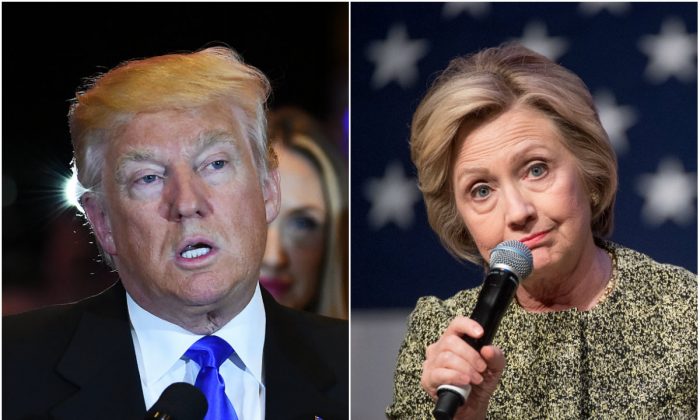 Nate Silver cautions against looking at the polls too closely.
By Steven Klett

The poll shows that there’s a wide gender gap between the two candidates, prompting Peter A. Brown, assistant director of the Quinnipiac Poll to say that it would be a good election for divorce lawyers:

“This election may be good for divorce lawyers. The gender gap is massive and currently benefits Trump,” Brown added.

The poll also shows that Democratic challenger Bernie Sanders does better against Donald Trump than Clinton in all three states.

Florida voters say 54-40 percent that Trump would do a better job than Clinton handling the economy, and say 49-43 percent that he would be better on terrorism.

Both candidates get a negative 37-57 percent favorability overall.

In Ohio, Trump leads with 43 percent to Clinton’s 39 percent.

The gender gap is also high in Ohio, where Trump leads 51-36 percent among men, and Clinton takes women 43-36 percent.

Ohio voters say 47-39 percent Clinton is more intelligent than Trump and by a narrow 43-39 percent that she has higher moral standards.

As in Florida, Bernie Sanders does better against Trump, leading 43 to 41 percent.

In Pennsylvania, Clinton leads with the same margin as in Florida: 43 percent to Trump’s 42 percent.

As with the other two states, the poll shows a gender and racial divide.

Trump Said He Would Make ‘Exceptions’ to Muslim Ban

Pennsylvania voters oppose 51-45 percent building a wall along the border with Mexico. White voters are divided as 49 percent want a wall with 47 percent opposed. Non-white voters are opposed 71-26 percent.

Clinton has the temperament to handle an international crisis, Pennsylvania voters say 55-42 percent, while Trump does not, voters say 62-33 percent.

Following the release of the poll, noted statistician and editor-in-chief at the website FiveThirtyEight went on a Twitter rant about the inaccuracies of general election polls before the convention.

“For [expletive]’s sake, America. You’re going to make go on a rant about general election polls — in May?” Silver wrote.

Silver pointed out that the data compiled fits with previous data that suggests a 6 percent lead for Clinton. He also said, “It’s early. Trump could win. Also, he could lose in a landslide.”

2. The data is consistent with Clinton having a ~6% nat’l lead over Trump. It’s early. Trump could win. Also, he could lose in a landslide.

4. Possible there are effects from Trump wrapping up his nomination while Clinton still competes against Sanders. We’ll know more in June.