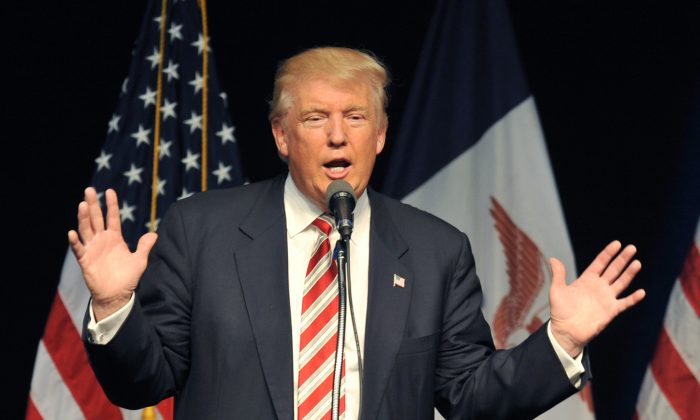 Donald Trump at a campaign rally on September 13, 2016 in Clive, Iowa. National polls have tightened recently with less than two months until the election. (Steve Pope/Getty Images)
News

Trump Ahead in Latest Ohio and Nevada Polls

Hillary Clinton has had a couple of rough weeks on the campaign trail, battling questions about her relation to Clinton Foundation donors, her ongoing email scandal, and a recent health scare. These factors have manifested as a slip in her support and affected her poll numbers in the swing states of Ohio and Nevada.

It also showed that voters are more likely to cast a ballot for the candidates rather than to use their vote against Trump or Clinton.

The poll also shows a widening gap between the senate candidates in Ohio, with incumbent Republican Senator Rob Portman polling at 53 percent and his opponent Democratic Governor Ted Strickland’s at 37 percent.

The Senate seat was thought to be in danger when Trump became the nominee, but has gradually seen the Republican incumbent pulling ahead.

Selzer’s poll fits into a trend that shows Trump tightening the race with Clinton in the state-by state and national polls.

Another poll in a swing-state that shows Trump on top is in Nevada by Monmouth University Polling Institute. The headline of the poll’s announcement says “Trump Overtakes Clinton” and shows the Republican leading by two percent—44 percent to 42 percent.

This is in contrast to Monmouth’s last national poll in July that showed Clinton up by 4 percent.

“The race in Nevada is still tight, but the momentum has swung toward Trump,” said Patrick Murray, director of the independent polling institute.

Monmouth’s latest poll shows that the support hasn’t changed, with Trump expanding on his base of white voters and Clinton maintaining a sizable lead among non-white voters. According to Murray, the shift is due to a shoring up of support for Trump.

“These demographic shifts are within the margin of error for these demographic groups, but they suggest that Trump has had a little more success solidifying his base in Nevada than Clinton has,” said Murray.

The Monmouth University Poll  was conducted by telephone from Sept. 11 to 13, 2016 with 406 Nevada residents likely to vote in the November election.  This sample has a margin of error of + 4.9 percent.

In the most recent Quinnipiac University national poll released Wednesday, Trump cut into Clinton’s lead—dropping from 10 percent in July to 5 percent in a head to head matchup. He also cut her 7 percent lead in a four-way matchup to a two percent lead.