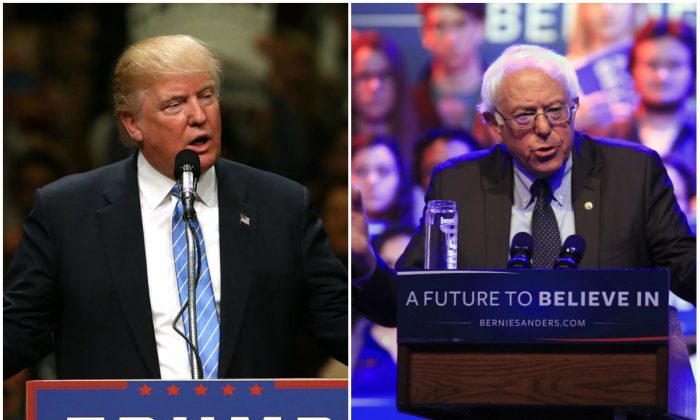 When asked if he would debate Sanders by Jimmy Kimmel on ABC’s “Jimmy Kimmel Live,” Donald Trump said he would “love to” and that it would raise a lot of money for charity.

“If I debated him, we should have such high ratings, and I think I should give—take that money and give it to some worthy charity, OK?” he said.

“That could happen, I’ve been saying that should happen anyway,” he added. “If he paid a nice sum for charity, I would love to do that.”

Within minutes, Sanders responded: “Game on. I look forward to debating Donald Trump in California before the June 7 primary,” he tweeted early Thursday morning.

Game on. I look forward to debating Donald Trump in California before the June 7 primary.

The Sanders campaign had earlier agreed to a debate in California, saying:

“Both campaigns have been invited by Fox News to a debate. We have told the network that we would accept the invitation with the understanding that we can reach mutual agreement on the debate moderators, the format and other details,” Jeff Weaver, Sanders’ campaign manager said in a statement.

The Clinton campaign declined to debate the Vermont Senator saying that her time would be better spent campaigning in California and focusing on Donald Trump.

“We have declined Fox News’ invitation to participate in a debate in California. As we have said previously, we plan to compete hard in the remaining primary states, particularly California, while turning our attention to the threat a Donald Trump presidency poses,” campaign communications director Jennifer Palmieri said in a statement.

“We believe that Hillary Clinton’s time is best spent campaigning and meeting directly with voters across California and preparing for a general election campaign that will ensure the White House remains in Democratic hands.”

“Naturally, Fox News is disappointed that Secretary Clinton has declined our debate invitation, especially given that the race is still contested and she had previously agreed to a final debate before the California primary,” Fox News Vice President and Washington Managing Editor Bill Sammon said in a statement.

As Clinton Slips, Bernie Beats Trump in Every Poll

Sanders also expressed frustration: “I am disappointed but not surprised by Secretary Clinton’s unwillingness to debate before the largest and most important primary in the presidential nominating process.”