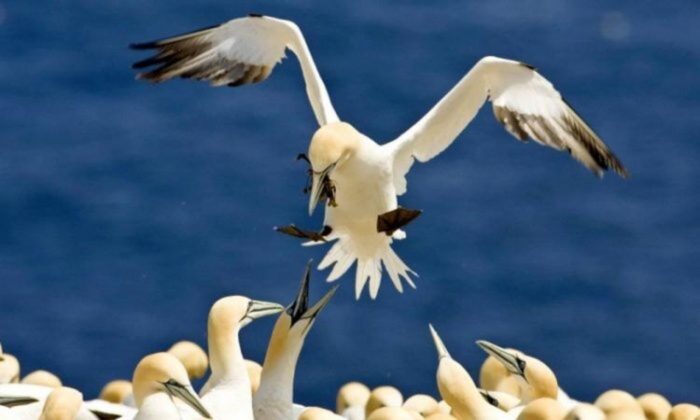 Northern gannets pictured on Bonaventure Island in Quebec, home to an estimated 55,000 gannet pairs. The gannet migrates to the southeastern coast of the United States each fall. (David Boily/AFP/Getty Images)
US

The U.S. Fish and Wildlife Service (FWS) announced Friday that it is proposing a rule that defines the scope of the Migratory Bird Treaty Act (MBTA), rolling back a far-reaching Obama-era interpretation in the process. The proposed rule clarifies that the scope of the MBTA only extends to conduct intentionally injuring birds. Conduct that results in the unintentional (incidental) injury or death of migratory birds would not be prohibited under the act.

According to Jim Magagna, Executive Vice President of the Wyoming Stock Growers Association, “WSGA welcomes the efforts of the U.S. Fish and Wildlife Service and the Department of the Interior to adopt a long–overdue commonsense definition of the prohibition of ‘take’ under the MBTA. This action will enable and encourage farmers, ranchers, and other landowners to become true partners in providing habitat and safety for migratory birds rather than operating in fear of being prosecuted for an unintended take.”

“With five federal circuit courts of appeals divided on this question, it is important to bring regulatory certainty to the public by clarifying that the criminal scope of the MBTA only reaches to conduct intentionally injuring birds,” said Assistant Secretary for Fish and Wildlife and Parks, Rob Wallace.

The action codifies the 2017 Department of the Interior Solicitor’s Office Opinion M–37050, which analyzed the scope of the MBTA and determined the act only applies to the intentional take of migratory birds and that the take of birds resulting from an activity is not prohibited when the underlying purpose of that activity is not to take birds.

According to the solicitor, Daniel Jorjani, “Unless permitted by regulation, the MBTA prohibits the ‘taking’ and ‘killing’ of migratory birds. ‘Incidental take’ is take that results from an activity, but is not the purpose of that activity.”

A 45-day scoping process will begin Monday, during which the FWS will seek input from the public in producing an Environmental Impact Statement to help define the issues and alternatives to be defined.

According to the DOI, bird hunting devastated migratory bird populations in the late 19th and early 20th centuries. A series of treaties and acts culminated with the Migratory Bird Treaty Act of 1918, which stated that “… it shall be unlawful to hunt, take, capture, kill … any migratory bird … or any part, nest, or egg of any such bird.” According to the memorandum, “Violation of MBTA was a misdemeanor criminal offense, punishable by a fine of no more than $500 and/or up–to six months in jail.”

In the course of several complex subsequent court cases, acts and opinions, the term “take” came to include “incidental take”—or the killing of even a single bird in the course of an action, whether the bird’s death was intentional or not. One of the final acts of the Obama Administration was to issue a legal opinion to the effect that the law did include the incidental killing of birds. Thus, it became clear that the MBTA potentially criminalized a plethora of activities such as “driving, construction, airplane flights, farming, electricity and wind turbines … and many other everyday lawful activities.”

The solicitor’s advice states that “The original purpose of the MBTA was to regulate overhunting” rather than to criminalize human activity, and that this purpose has not changed.

According to Tammy Pearson, the Commissioner of Beaver County, Utah, “The proposed changes to the Migratory Bird Treaty Act are long overdue. The need to clarify what is NOT criminal ‘take’ is essential for energy, mining, ranching, and other industries that are critical to the economic stability of rural families, communities, and counties. It has been a giant thorn in the side of economic development for far too long, with projects being delayed for the potential harm that might happen to a bird despite the developer’s best intentions and protective efforts. These clarifications to the ‘intent of the person’ are needed to be made to protect our local farmers and ranchers in their everyday operations.”

“Clarifying the scope of the Migratory Bird Treaty Act is long overdue,” said Bette Grande, Chief Executive Officer at Roughrider Policy Center, a North Dakota think tank. “Agenda-driven politicians have stretched the MBTA to punish industry and citizens they don’t like. In 2011, the U.S. Attorney for North Dakota used the MBTA to sue three oil companies over the deaths of six ducks that were found dead at drilling locations and issued arrest warrants for individuals at the three companies. The charges were thrown out, but only after significant cost and uncertainty.

While the intent of the MBTA early last century is laudable, the provisions have been increasingly interpreted and enforced on ideological grounds. … The broad interpretation of ‘take’ that disregards ‘intent’ moves the MBTA far beyond the intent of Congress. Unchecked, it will continue to burden our economy, and the American people with increased costs decreased efficiency and the prospect of criminal charges for a lawful activity that results in unintended consequences.”

Wyoming State House Representative Dan Laursen (R—WY) “The clarification of the Migratory Bird Treaty Act has been needed for too long. I have heard of oil producers going into hiding worried they might be put in prison by the regulators. The broad interpretation of ‘take’ by regulators has been taken far beyond the original intent of the Act. Farmers and the mineral industry have been in fear for too many years. It is great to hear our Administration working hard to rein in the abuse.”

“Over the past 40 years, bird populations have declined by nearly 30 percent. Despite this, the Trump administration is moving to weaken protections for migratory birds in ways that are fundamentally inconsistent with the Migratory Bird Treaty Act,” said Collin O’Mara, president and CEO of the National Wildlife Federation. “The rule sends an irresponsible—and legally incorrect—signal to industry that commonsense measures to protect birds like the snowy egret, wood duck, and greater sandhill crane are no longer needed. We urge the Trump administration to reverse course and restore protections for America’s birds.”

Jennifer Rokala, Executive Director at the Center for Western Priorities, a conservation and advocacy organization, said that “This radical interpretation of the law has already allowed oil companies to kill birds without repercussions. Now, the Trump administration wants to make sure extractive industries can continue to kill birds after they leave office.”

Referring to David Bernhardt, the Secretary of the U.S. Department of the Interior, Rokala said that “Secretary Bernhardt’s former oil industry clients have explicitly asked for this policy change, and now he is delivering. It seems there are no limits to what Bernhardt will do to shred wildlife protections at the behest of drilling and mining companies. Finalizing this proposal would only sign the death warrants of millions of birds across the country.”