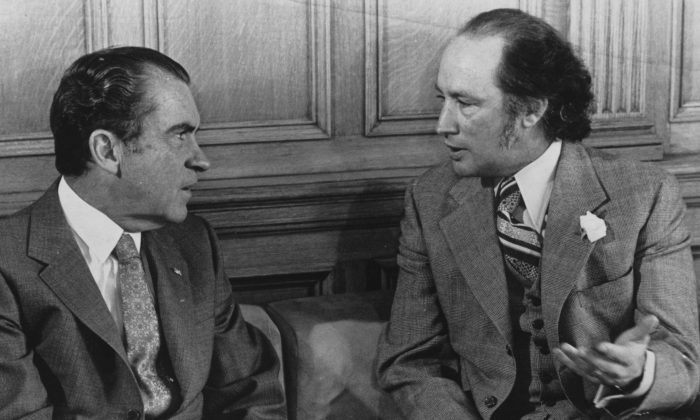 OTTAWA—Pierre Trudeau’s bid to enhance Canadian sovereignty and promote economic development in the Arctic created some “friction” with the United States, says a declassified CIA report.

As Prime Minister Stephen Harper wraps up his annual northern tour, the Central Intelligence Agency assessment serves as a reminder that he’s not the first prime minister to wave a political flag in the North.

The August 1983 report is among several CIA documents about Canadian affairs released under the U.S. Freedom of Information Act in recent years.

The CIA said Trudeau—and his political predecessors—had effectively tapped into a sense of northern identity, historically a strong ingredient of Canadian nationalism.

The intelligence agency felt Ottawa’s interest in asserting itself in the North was primarily due to the region’s abundance of petroleum, natural gas, and coal.

“This policy has been unilateralist and has resulted in some international friction, particularly with the United States,” says the report, adding, “We believe, however, that it will be maintained.”

Portions of the CIA handbook on the Canadian Arctic, which is intended as a reference aid, remain secret. It traces the history of Canada’s claims over the Arctic and examines how boundary disputes, the environment, energy policy, the Inuit, and territorial administration had figured in Ottawa’s strategy over the decades.

For most of the 20th century, Canada’s claims were not challenged because of the region’s inaccessibility and the general lack of interest in—or knowledge of—its vast resources, the CIA notes.

The Canadian government “clearly grew uneasy” by the late 1960s as the scarcity of world fuel reserves became increasingly apparent and the location of the Arctic’s natural resources became better known.

The U.S. tanker Manhattan’s 1969 voyage—without notification or permission—through the Northwest Passage sparked fears of a diminished Canadian grip on the region.

Canada moved to strengthen its legal position by making new jurisdictional claims over fisheries and pollution control, investing in oil and gas exploration, increasing the military’s presence, and trying to improve communication systems, the report points out.

“It has also sought to formulate Arctic policies with a nationalistic slant to create public interest in and enthusiasm for the development of the ‘last frontier.'”

The United States has long been skeptical of Canada’s efforts, however, said Christopher Sands, a Canada-U.S. relations expert at the Washington-based Hudson Institute.

“The complaint from the U.S. side, for as long as I can remember, is that Canada uses the Arctic for domestic political purposes—(and) doesn’t follow through on commitments and capabilities,” Sands said in an interview.

The 1985 passage of another U.S. tanker, the Polar Sea, though the Arctic prompted bold plans by Brian Mulroney’s Progressive Conservative government to procure an expensive new icebreaker. Soon after, there was talk of acquiring nuclear-powered submarines, but none of these ideas came to fruition.

In recent years, concerns about Arctic sovereignty have intensified due to global warming and the melting of sea ice, which many believe will lead to increased ship traffic through the Northwest Passage.

The Harper government has announced plans for new offshore patrol ships, a high-Arctic research station and a beefed-up military capability in the North.

“This has been a durable theme in Canada, and so I would expect Stephen Harper to keep going up every year he can. Probably his successor will as well,” Sands said.

“And there will be lots of announcements of spending. But in terms of actually developing a presence up there, it won’t happen. At least it won’t happen unless there’s a shock to the system that really leads Canadians to demand something else from their leadership.”