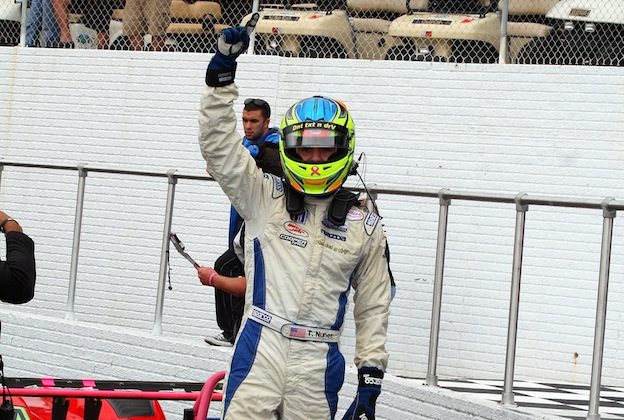 BRASELTON, Georgia—Tristan Nunez became the Cooper IMSA Lites champion Thursday at Road Atlanta with a hard-fought third-place finish in the season’s penultimate race last Thursday. In doing so the 16-year-old racer became the youngest sports car champion in the world.

Facing a field of older and more experienced drivers, the teenager racing sensation showed the skills which earned him the top spot: sent to the back of the field by an early penalty, Nunez passed almost every car in the race in just a few laps to finish on the podium and clinch the title.

Though no stranger to success—the Florida teen had 10 wins, 11 poles, and set seven track records in twelve races coming into the season finale—Nunez was still a little overwhelmed by his triumph the next day.

“Winning the championship still hasn’t sunk in yet. I can’t even find the words to describe how happy I am right now,” he said.

Nunez saw the significance of the title to his own career but also viewed in terms of how it would affect other fledgling race drivers. “I’m the only teenager that’s gone the road of sport car racing. I think it’s going to make a big impact that everybody sees, ‘This could be another way to go,’ rather than Road to Indy or something like that.

“I have nothing against Road to Indy, I think it’s a great program, I’ve just always had a love for sports car racing.”

Road to Indy has established a set of series—USF2000, Star Mazda, Indy Lights—which groom drivers for IndyCar racing. Nunez and Performance Tech Motorsport is proving that there is a “Road to Le Mans” so hopeful young racers have options.

‘Best Performance of my Life’

Tristan Nunez came to the Road Atlanta with the Cooper IMSA Lites championship all but clinched. The speedy teen—youngest winner in series history—had only to avoid disaster to become the youngest ever champ. He had a 39-point lead on JDC Motorsports’ Mikhail Goikhberg, and needed only to finish better than 13th to win the title.

Disaster, however, proved to be the perfect road to success.

The start of the first race of the event was controversial, as the green flag waved before the cars exited the final corner. Goikhberg, starting from the pole, hesitated; perhaps he was not in the right gear or perhaps he was waiting for the start-finish line. The JDC driver did not make himself available for comment.

In any case, Nunez wasted no time and opened a sizeable lead into Turn One, only to be penalized for jumping the start.

“My coach said ‘The green’s out;’ I hesitated because I didn’t see the P1 car [Mikhail Goikhberg] go, so I kind of looked over and I saw the green flag,” Nunez explained. “I guess Mikhail was in a different gear and fell back so it looked like I jumped the start.

“I was penalized for that—a stop-and-go penalty—came out like 17th when I was out on the track again.”

This penalty gave Goikhberg a second chance at the title, but Nunez, though last, was far from done.

The young title contender started ripping off fastest laps—”I guess I was driving angry,” he said—slicing through the field several cars per lap. By lap 13 he was fourth behind Goikhberg, Eurosport’s Jon Brownson, and Performance Tech teammate Ryan Booth.

Heading into Turn Six with five laps to go, Goikhberg and Nunez tangled. Nunez came out the better. Goikhberg spun and fell to 15th while the Performance Tech driver held onto his car and claimed third.

“I was on a charge. I was on a mission to get up and win the race,” said Nunez. “He made a mistake coming out of Turn Five he was on the way inside so I took the outside going into Six. I definitely was ahead of him going into Six.

“I held the outside and we kind of made contact, threw me off the track and I think he spun also but I kept it together, pulled it back on the track and a tried to chase Brownson down but couldn’t quite catch him. Maybe with a few more laps I would have gotten him but I am happy with third.

“It was the best performance of my life I think.”

It was indeed a tremendous display of skill and motivation. Nunez set the race’s fastest lap on the final lap; he was determined to do everything in his power to win.

Much as he would have liked a flag-to-flag win by a huge margin, he made the most of the chance to showcase his skills in front of the American Le Mans Series teams gathered for their season finale, Petit Le Mans. This is a young driver who will have no trouble securing a ride anytime in the future.

The season’s final race, on Friday, was more normal by 2012 standards: Nunez started from the pole, opened a big lead, and repeated the process after each yellow flag, of which there were several.

Nunez was glad to finish the year with an 11th win, but he really wanted one more chance to show his stuff.

“All those yellow flags—it was hard to really let the car loose,” he said. “It’s my last race of the season—I wish it would have been a green-to-green, no yellows, letting out the car as best I can.

“I was scared that Brownson was going to find out my little tricks on the restarts but I don’t think he did.”

No one figured out the young champion’s tricks—he won the race by six seconds.

Nunez, winner of the 2012 Team USA Scholarship, will be heading across the pond next week to display his talents to the continental teams.

“I got picked for Team USA to go to England and race two races in the Formula Ford Championship, the Walter Hayes Trophy and the Formula Ford Festival,” he explained. “That’s been a great honor.

“I’ve always wanted to be a part of that program ever since I started racing cars. I saw my buddies go to that program and get picked and it’s just a huge honor for me to go over there. Hopefully I can give Europeans a run for their money.”

Wherever he races, Tristan Nunez is assured of success. The young driver has the reflexes, the poise, and most of all the desire to reach the top of his chosen profession. Given a modicum of good luck, he could become the youngest ever winner in ALMS, WEC, and at Le Mans.