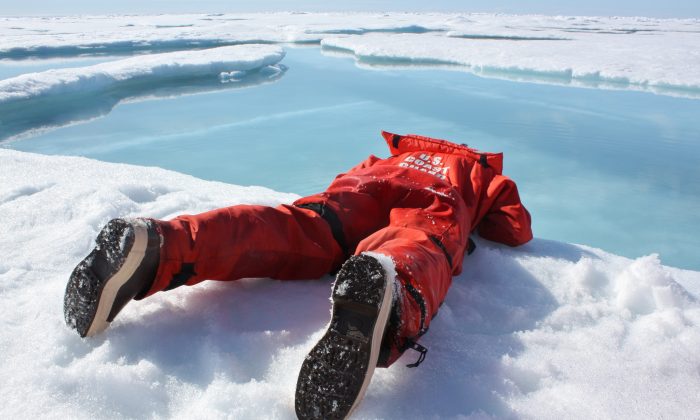 To answer a 40-year-old question about Arctic ice thickness, scientists have treated the ice floes of the frozen seas like colliding molecules in a fluid or gas.

Although today’s highly precise satellites do a fine job of measuring the area of sea ice, measuring the volume has always been a tricky business.

The volume is reflected through the distribution of sea ice thickness—which is subject to a number of complex processes, such as growth, melting, ridging, rafting, and the formation of open water.

We transformed the intransigent term into something tractable and—poof—solved it.
— John Wettlaufer, Yale University professor

Enter Yale University professor John Wettlaufer, inspired by the staff and students at the Geophysical Fluid Dynamics Summer Study Program at the Woods Hole Oceanographic Institution in Massachusetts. Over the course of the summer, Wettlaufer and Yale graduate student Srikanth Toppaladoddi developed and articulated a new way of thinking about the space-time evolution of sea ice thickness.

“The Arctic is a bellwether of the global climate, which is our focus. What we have done in our paper is to translate concepts used in the microscopic world into terms appropriate to this problem essential to climate,” says Wettlaufer, professor of geophysics, mathematics, and physics.

Wettlaufer and coauthor Toppaladoddi recast the old theory into an equation similar to a Fokker-Planck equation, a partial differential equation used in statistical mechanics to predict the probability of finding microscopic particles in a given position under the influence of random forces. By doing this, the equation could capture the dynamic and thermodynamic forces at work within polar sea ice.

“We transformed the intransigent term into something tractable and—poof—solved it,” Wettlaufer says.

The researchers say their equation opens up the study of this aspect of climate science to a variety of methods normally used in nonequilibrium statistical mechanics.