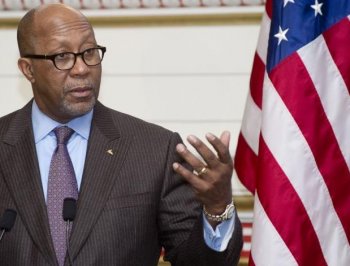 U.S. Trade Representative Ambassador Ron Kirk speaks during a panel discussion in Washington, D.C., on Jan. 13. The U.S. says Canada has been selling lumber for prices below those outlined in the timber pricing system grandfathered under the Softwood Lumb (Saul Loeb/AFP/Getty Images)
US

As a result of a U.S. legal challenge, the London Court of International Arbitration has ruled that both Quebec and Ontario have breached the terms of the 2006 Softwood Lumber Agreement (SLA) and Canada will have to pay US$59.4 million if the dispute is not resolved.

If Canada does not take steps to fix the problem within 30 days, the tribunal ruled it will have to impose charges on softwood exports from Quebec and Ontario.

International Trade Minister Peter Van Loan has issued a statement saying the government is closely reviewing the tribunal’s decision and its impact on the Canadian lumber industry.

“I note that the tribunal rejected 97 percent of the United States’ $1.86 billion claim as having no basis,” he said.

U.S. Trade Representative Ron Kirk said in a statement that Canada has been selling lumber for prices below those outlined in the timber pricing system grandfathered under the SLA, in breach of the 2006 agreement.

The U.S. says the “central issue” in the dispute are its claims that B.C. has been selling lumber to producers at a very low fixed rate not justified under the SLA, “even when known factors affecting timber quality (such as damage from the mountain pine beetle) are fully taken into consideration.”

But Pat Bell, B.C. Minister of Forests, Lands, and Mines, says the increased harvest of low-grade timber in B.C. is due to the unprecedented pine beetle infestation forcing prices down, and the U.S. should not be so quick to claim wrongdoing.

“I believe U.S. lumber producers would be better off if they continued to work with Canadian producers to grow the market for wood across North America, instead of putting their resources into costly, groundless litigation,” Bell says.

“The irony behind the U.S.’s complaints is that since the Softwood Lumber Agreement came into force, U.S. lumber producers have actually increased their share of the U.S. market.”

However, Steve Swanson, chairman of the Coalition for Fair Lumber Imports and president of Swanson Group, a private forest products company in Oregon, says B.C.’s pricing policies are destroying the industry in North America.

Selling salvage timber for just 25 cents a cubic metre “has saved B.C. Interior lumber producers hundreds of millions of dollars in fibre costs, compared to what they would have paid under the timber pricing system that was in place when the U.S.-Canada Softwood Lumber Agreement was signed,” Swanson said in a release.

“As North American lumber producers have curtailed production, closed mills, and been forced to let go thousands of workers due to the severe lumber market downturn, the B.C. government’s expanded and unfair subsidy to B.C. Interior mills has had devastating effects on the rest of the industry outside B.C.—both in the United States and Canada,” he added.

But John Allan, president of the BC Lumber Trade Council, says B.C. has not violated the lumber agreement since its market pricing system and stumpage rates applied to beetle-infested timber are included in the SLA.

Allan believes the main reason the U.S. has instigated arbitration is its economic crisis. The housing market—and therefore the lumber market—are depressed and need a boost.

“Whenever there’s a downturn in the industry, whenever there’s negative economic conditions, you’ll see the U.S. lumber industry cry subsidy. It’s a constant sort of behavioural pattern they pursue, and we’re seeing it again this time around,” he says.

At the behest of Washington, the B.C., Canadian, and U.S. governments engaged in formal consultations last October. The U.S. says the talks were unsuccessful, but Allan says it was not a sincere effort to resolve the dispute.

“The truth of the matter is we only had one hour of meetings, and the U.S. didn’t bring forward any ways or means by which they would seek resolution. … I would say by about mid-late summer last year, I think the political card had been played—we were going to arbitration no matter what.”

The softwood lumber issue has been one of the longest running trade disputes in Canadian history, and before the 2006 agreement, “disputes resulted in unilateral action that unduly and unjustifiably punished the Canadian forestry industry,” Van Loan said.

Allen predicts the arbitration process will take at least two years, during which time it will be business as usual for the lumber industry.

“The arbitration process is one in which you are innocent until proven guilty. If we were being sued under U.S. trade law generally, you’re guilty until proven innocent. At least this time around there’s no material impact on the B.C. lumber industry.”