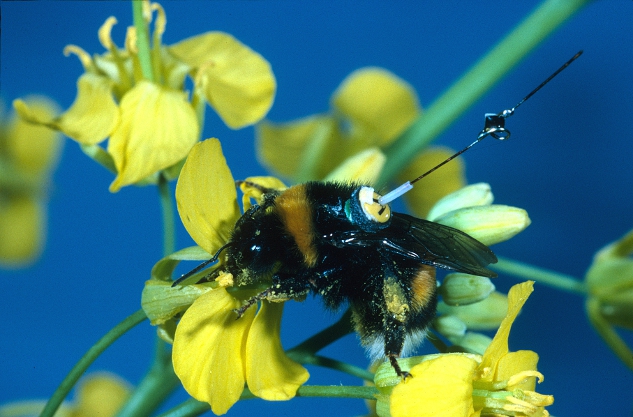 A bumblebee worker with a transponder attached to its back, visiting an oilseed rape flower. Tracking bees with radar shows how they find an optimal route between multiple flowers. (Andrew Martin)
Science

A new U.K. study of bumblebee foraging behavior has shown these insects may be following simple rules to locate multiple flowers across considerable distances.

The researchers studied how bumblebees, Bombus terrestris, chose the most efficient route for collecting nectar from five artificial flowers in a pentagon arrangement. Tiny radar transponders were glued to the bees’ backs, and a motion-triggered webcam was set up at each flower.

“Using mathematical models, we dissected bees’ learning process and identified how they may decipher this optimal solution without a map,” said study co-author Mathieu Lihoreau at Queen Mary, University of London (QMUL) in a press release. “Initially, their routes were long and complex, revisiting empty flowers several times.”

“But, as they gained experience, the bees gradually refined their routes through trial and error.”

Whenever a bee selected a new route, it was more likely to follow it again if it’s shorter than the shortest route tried before. If not, another route was tested instead.

“After an average of 26 times each bee went foraging, which meant they tried about 20 of the 120 possible routes, they were able to select the most efficient path to visit the flowers, without computing all the possibilities,” Lihoreau said.

This seemingly complex behavior can be described mathematically with quite simple rules. Thus mathematics can be used to assess the effect of environmental changes on bee behavior.

“The speed at which they learn through trial and error is quite extraordinary for bumblebees as this complex behavior was thought to be one which only larger-brained animals were capable of,” said study co-author Lars Chittka, also at QMUL, in the release.

“Interestingly, we also found that if we removed a flower, bees continued looking at that location—even if it was empty for an extended period of time,” he concluded.

The study will be published in PLOS Biology on Sept. 18.