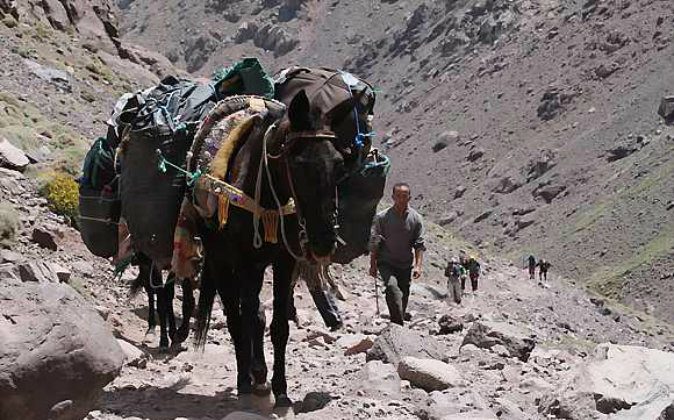 It’s possible rent a mule and it’s muleteer to carry your stuff during the trek (Photo: Natalia Belzarova)
News

We fled Marrakesh less than 24 hours after we arrived. The Grand Taxi’s station wasn’t very difficult to find : a Petit Taxi led us there for less than 1$. From there we wanted to reach Imlil, the small village which is the departure point for the hike which leads up to the highest summit of Morocco, the Toubkal.

The station was at the border between Marrakesh and the countryside: that was a kind of waste ground where some people were selling fruits and vegetables. The smell of gasoline was filled the air. A dozen of old sand-colored Mercedes cars were parked in the lot. Their drivers were chitchatting together in the shadow of the fruit stall. Before my foot hit the ground, they literally teleported themselves next to us, asking “Where are you going ?” After a small bargain we were driving east, in the direction of the mountains lost in the mist.

The counter of the antique Mercedes displayed 962,421km, but didn’t move anymore. The hand of Fatima was hanging from the rear-view mirror, dancing to the rhythm of the bends in the road. The desert-like landscape of Marrakesh’s surroundings quickly became mountainous, and the road tapered thinner as it again and again moved through the switchbacks. Sometimes, we could see mules and their drivers on the side of the road and some old mopeds, but they all disappeared in a blink of an eye. The closer we got to Imlil the worst the road became, and it soon turned into a dusty track covered with potholes.

8 Reasons Morocco Should be Your Next Travel Destination

Health and Safety Tips for Hiking and Trekking in Morocco

Imlil is a small village which is perched 5,500 feet above the sea. New buildings stand next to traditional ones. The chain of the High-Atlas where the second highest peak of Africa rises -the Toubkal- stretches away from north to south in the east part of Morocco, running parallel with the Atlantic coastline. We met Luis there, the Spanish guy who would walk with us during a part of the trek.

The dawn was close and the air fresh when we woke up. The village seemed like a ghost city in the surrounding fog. We met up with Luis, and drank tea in order to wake and warm us up before starting our hike. Then, it was only a matter of following the track that was winding through the mountain. The fog was covering everything: it was impossible to see something further than 50 feet away. We could hear the noise of a river roaring down the mountain but its bed was lost in the mist.

After some time we crossed hundreds of meters along the bottom of a valley, dug by a glacier long ago. The stones were rolling under our shoes, and the mist began to clear, allowing the landscape to appear. We could finally catch a glimpse of the peaks which surrounded us: high and torn summits covered by snow here and there. Then, we took the small path near a sign that said “You are now entering in the Natural Park of the Toubkal.”

At this moment a Moroccan perched on a mule and its muleteer overtook us: “You should ride a mule like me, it’s easier !” laughed the man on the mule. We hadn’t wanted take a guide or mules to carry our stuffs: it was too expensive for something we could do ourselves. Though it was true that we would be able to enjoy the landscape better if we just had a small backpack to carry, but the rewards at the end would not be the same. It would have been like doing something half way: hiking is not just about walking, carrying your gear is part of the equation.

The more we were walking, the more the landscape became harsh and steep. The green from Imlil and its surroundings slowly gave way to a land of rocks.  The sky was bright blue and only some swift summer clouds were passing by as a small breeze was blew.

Natalia, Luis and I took a short break, but sat most of the time without any words. While we were trying to get our breath back we stared into the mountains around us: we could see some flocks of sheep on the other side of the valley, some green tufts here and there.

During one of theses breaks, the muleteer and the guy perched on the mule appeared. How the hell did we overtake them!?! When they passed for the second time in front of us, the man on the mule searched in one of the bags hanging down on the side of the mule, dug out an orange, and threw it to me with a big smile on his face.

After three or four hours walking, a small village came up from nowhere at the end of a small cirque. The small constructions had the same color as the stones which surrounded it, and blended into the landscape. Only the red mosque conspicuously rose out the rocks. Before reaching it we had to cross a little bridge that straddled a bubbling icy-blue river. Some people seemed to live there, three hours walking from the closest village.

Copyright © 2015 by Vagabond Journey Travel. This article was written by Pierre Laurent and originally published on www.vagabondjourney.com.