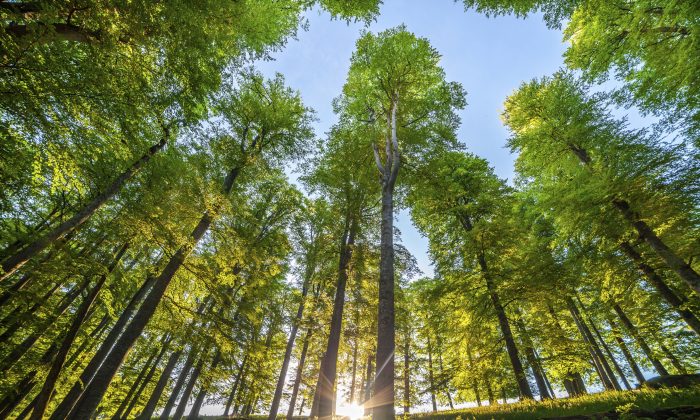 In the face of adverse conditions, people might feel tempted by two radically different options: hunker down and wait for conditions to improve, or press on and hope for the best. A new study suggests trees employ similar options when the climate turns dry and hot.

Researchers have uncovered details of radically divergent strategies that two common tree species use to cope with drought in southwestern Colorado. One tree species shuts down production and conserves water, while the other alters its physiology to continue growing and using water.

As the entire western United States becomes warmer and drier through human-caused climate change, the findings shed light on how woody plants may confront twin scourges of less water and hot weather.

To understand if different tree species employ similar coping strategies for drought, and how these strategies would affect their future ranges in a warmer and drier climate, the researchers compared how two common tree species differ in terms of shape, growth rate, and physiology across wet and dry portions of their native ranges. Their findings are published in the journal Global Change Biology.

“We really wanted to identify the entire suite of strategies that a plant can use to grow in drier environments, as well as which of these strategies each tree would employ,” says Janneke Hille Ris Lambers, professor of biology at the University of Washington.

Along the slopes of the La Plata Mountains in Colorado’s San Juan National Forest, dry and hot conditions at lower elevations limit tree growth and survival. The ponderosa pine (Pinus ponderosa) grows along these lower elevations. Higher up the slopes, trembling aspens (Populus tremuloides) dominate, and the lowest point of the aspen’s range overlaps with the higher reaches of the ponderosa pine. In the summer of 2014, researchers collected leaf, branch, and tree ring samples of both trees at the extremes of these ranges to learn how they adapted to drought conditions, measuring qualities like growth rate and water tension within the woody tissue.

What they discovered is that the two trees adopt opposite strategies to cope with drought, with implications for their range and survival.

“On average, this region has already warmed up over 1.5 degrees Fahrenheit in the last 30 years,” says biology graduate student Leander Anderegg. “And what were once 100-year droughts are expected to become more frequent in the coming centuries.”

The ponderosa pine used a strategy of “drought avoidance” by conserving water, especially by shutting the tiny openings on its leaves to prevent water loss and slowing growth. The trembling aspen, in contrast, deployed strategies that would allow it to keep growing—at least for a while—during drought, with no change to water conservation strategies.

“On the dry end of their range, the trembling aspens are relatively short with these really fat leaves,” Anderegg says. “Internally, they also grow really strong xylem vessels, which move water inside of the tree. As a consequence, they are much denser and they also grow slower.”

Do Trees Really Help Clear the Air in Our Cities?

These strategies may influence the contraction of each tree species’s range over time. The trembling aspen’s push to grow might make it more vulnerable to severe or prolonged drought, especially at its dry lower range. Anderegg believes the aspen’s range might shrink in “fits and starts” as a hotter a drier climate settles in. A severe drought in 2002, he notes, already killed off large numbers of trembling aspen at the study site.

The ponderosa pine’s strategy of “drought avoidance” might mean that its range will contract more gradually than the trembling aspen’s. These differences in adaptation will reshape forest ecosystems in the face of climate change. The researchers would like to identify the tree life stages most vulnerable to drought, which might affect how quickly their ranges contract, and what forest policymakers could do to try to cope with these changes.

“If we know how the forests will change, we can hopefully manage things so that we don’t lose the things we love and rely on—things like air and water purification, erosion control, and forest biodiversity,” Anderegg says. “We’d like to be able to mitigate some of the negative effects to this vast public resource and keep climate change from being hugely detrimental.”