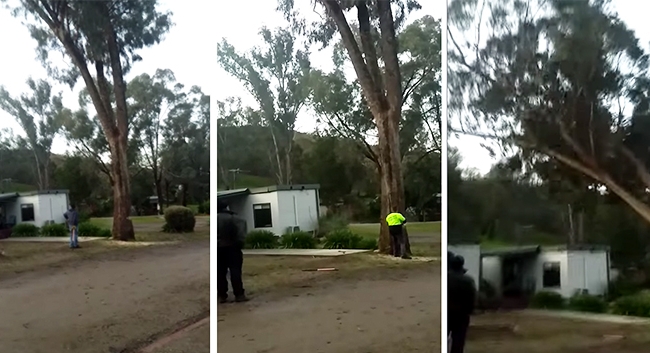 An incident involving a tree and a house unfolded—dramatically in Glenrowan, Victoria, Australia, late last year.

“My husband and I were staying in a cabin. After a storm passed, we found the park owner inspecting a fallen tree which had narrowly missed the park’s huge LPG tank,” the woman who captured the clip recalls.

“He set about chopping it up with his chainsaw. John had a look and agreed that it was a dangerous situation, he got ready to move our vehicle. The outreaching branches of the tree smashed down through our cabin bathroom. The only thing out of place though was my shower gel which had been knocked to the floor. The park owners immediately offered us another cabin and we moved all our gear out of the broken cabin into the new upgraded one.”

The worker cutting down the tree apparently tries to angle the cut so as to make it fall away from the home—but fails.