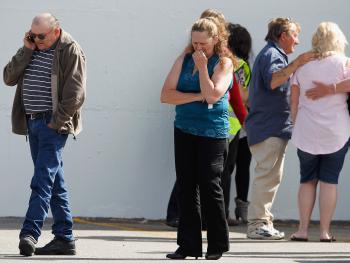 Diane Cordemans
View profile
Follow
biggersmaller
Print
Families of the men trapped in New Zealand's Pike River Coal Mine since last Friday are reeling in shock at the news of a second explosion inside the mine this afternoon.

Police Superintendent Gary Knowles said that the enormity of the explosion, which occurred at 2:37 p.m., was such that there would be no survivors, OneNews reported.

The explosion occurred as the rescue team was preparing to enter the mine. Checking an anomaly in the data had delayed the move, at which point the tragedy happened.

Pike River Mine CEO Peter Whittall said it was difficult for him to tell the families of the trapped men the disastrous news.

“They have looked to me for hope and for keeping them informed. I have tried to do that as factually as I can. It was my task and I wanted to tell the families," he told OneNews.

"This has got to be the darkest day for me. For Greymouth, for everywhere. This is the darkest day,” Grey District Mayor, Tony Kokshoorn told the New Zealand Herald.

The families of the trapped miners collapsed in shock and wept, he said, when they were told the  tragic news at a police briefing.

"People shouted out in anger, they are sickened by the whole thing," he added. "A lot of them felt misled."

In a speech delivered at the Beehive, Prime Minister John Key spoke of the "agonizing blow" for a country to lose so many men in one incident.

Key said it was “a tragedy for the men's families, their workmates and friends, their community and our nation,” according to Television New Zealand.

“New Zealand is a small country," he said. "A country where we are all our brother's keeper. Today, all New Zealanders grieve for these men.”

Key said he would be returning to the Greymouth area tomorrow to pass on his condolences to the grieving families.