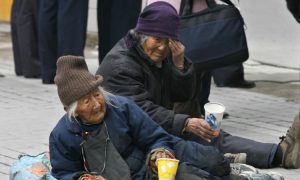 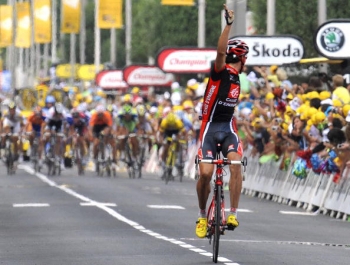 Kim Kirchen (R) sprints on the finish line with (From L) Alejandro Valverde, Stefan Schumacher and Filipo Pozzato at the end of the seventh stage of the 2008 Tour de France. (Pascal Pavani/AFP/Getty Images)
Sports

After breaking away with three other riders, and getting caught, Caisse D'Epargne rider Luis Sanchez found it in himself to make a solo attack at the end of a very high-paced and hilly stage, leaving the pack behind and crossing the finish line alone, winning Stage Seven of the 2008 Tour de France.

Stage Seven, Brioude to Aurillac, was a difficult and dangerous stage, 159 km of narrow, twisting roads, with many steep climbs and some equally steep descents. The stage has a category Four climb, two Threes and two Twos, with the two hardest climbs coming in the last third of the race, followed by a long, steep descent.

"It's not an easy stage today," said second-place rider Cadel Evans. "The climbs are not particularly hard but there are enough to cause some splits in the bunch. "I'd say there'll be a group of about 70 or 80 riders coming to the line together and someone like Oscar Freire will be there to take the win. "The long descent from the Puy Mary will give some of the more resilient sprinters the chance to catch up again and Freire falls into that category."

The race started with several unsuccessful attacks, none of got more than more than thirty seconds ahead or stayed away for more than fifteen km.

At around 60 km, a crash in the peloton split the field in two. At 75 km Francaise Des Jeux rider Lilian Jegou hit a tree on the side of the road. He broke his wrist and has had to withdraw from the Tour.

By the halfway point, a group of powerful riders had formed a serious attack, including several CSC riders, who were leading the group and pushing quite hard. The lead group opened a gap of about thirty seconds, trying to gain an advantage going into the Category Two climbs, hoping that the peloton would fragment on the hills.

Both groups burned a lot of energy before hitting the hardest hills. The average speed for the second hour of the race was almost 43 kph.

Attacks started as soon as the road got steep. Two riders, Josep Jufre (Saunier Duval) Luis Sanchez (Caisse D'Epargne) went out well ahead, but the peloton ignored them.

Groups of riders tried to attack, but the Team Columbia riders, driving the peloton, kept the pace high and rode down all the larger attacks.

Two riders De La Fuenta of Saunier Duval and Vincenzo Nibali of Liquigas joined Jufre and Sanchez in the breakaway; the gap was now nearly two minutes. This was the first attack to survive for any length to this point in the stage.

The descent from Puys Mary was extremely technical—filled with tight corners, steep stretches, gravel in the gutter. Riders reach speeds of 90 kph at points, but have to brake hard for the switchbacks. The descent is a great place to make up time for riders willing to literally risk their lives going off the side of the mountain.

To make matters worse, there were wet patches on the road, which could catch riders off guard.

The lead group crested the peak in heavy fog with under a minute advantage. David De la Fuente hit one of these wet patches and nearly lost control on a few occasions; he lost the leaders, but pressed on and recaught them. He dropped off the lead group

By this time the peloton had split into several groups, with Columbia leading a group chasing the leaders. The lead group, back on the flat, was riding at over 50 kph, still a minute ahead of the first chase group.

The end of the stage featured a Category Three climb, short but quite steep at 9.9 percent, followed by a tricky descent into the town of Aurillac.

The pace up the final climb was extremely high, Up front, David de la Fuentes made a strong attack, leaving the rest of the lead group well behind.

The peloton was a minute behind the leaders going into the climb; climbing fanatics Euskatel-Euskadi drove the peloton up the hill, catching the leaders, and cutting Fuentes' lead to ten seconds by the top of the climb.

With 10 km to go Schumacher, fighting to regain the yellow jersey, made a move, with Oscar Periero (Caisse Depargne) on his wheel. Riccardo Ricco attacked also. Kim Kirchen, defending the yellow, attacked to join the Schumacher group. Twenty riders managed to ride down this break shortly after the peak, leaving the peloton split even further.

Then, with five km to go, Luis Sanchez made his move, attacking off the front of the peloton, and opening a big lead. Sanchez seemed to be riding easily and steadily, working hard but calmly. Sanchez is a time trial expert—riding alone and digging deep for maximum performance is his specialty, and that is what he did.

The chase group put everything into trying to catch Sanchez, but they simply didn't have the legs. Sanchez took the stage win, reaching the line several seconds ahead of the field.

With half a kilometer to go, Schumacher attacked, with Kim Kirchen right behind him. Kirchen couldn't quite hold on; Schumacher took second, with Liquigas rider Filippo Pozzato edging out Kirchner to take third.

A Tour Full of Twists

The pace set throughout the race—indeed, throughout the Tour to date—has been unusually high. One wonders how ling the riders will be able to keep this up, riding near maximum through most of every stage. The general strategy seems to be to ear everyone out and let conditioning decide the Tour; the sprinters will be too tired to spring, the climbers too tired to climb, and whoever can endure the most pain will wear the yellow.

So far the Tour has been a series of unexpected results. The big sprint stages didn't end in big sprints, stages that weren't supposed to be sprint finishes were, and riders and teams that no one thought would perform well, have come to the fore.

As the Tour progresses into the Pyrenees, can the pace possibly hold? Will the climbers be able to climb? Will the young American teams continue to shock the cognoscenti by outperforming the European veterans?

This has been a strange and exciting Tour so far, and all signs show that it will only get better.

Check here for
complete coverage of the
2008 Tour de France