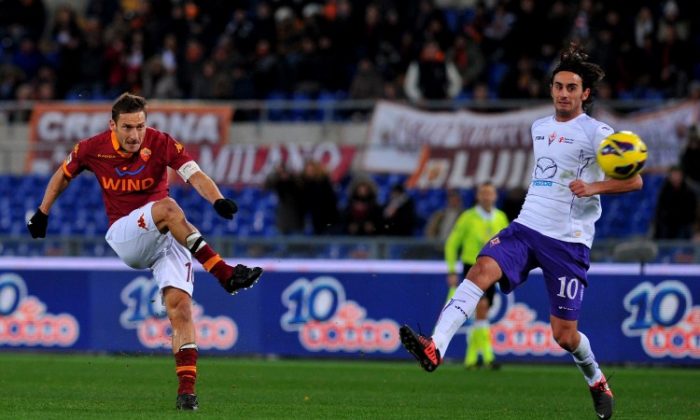 Francesco Totti knocked Fiorentina down to its knees with a two-goal and one-assist performance in a 4–2 win at Stadio Olimpico on Saturday.

Roma’s win over Vincenzo Montella’s team, in a game played at breakneck speed on both sides, saw them surge into fourth place in Serie A. Roma, Fiorentina, and Lazio are all tied with 29 points.

Roma got its fourth consecutive win, confirming through a spectacular game the choices of criticized coach Zdenek Zeman, who at the end of the match promised a hopeful future. “We want to be on, we want to try to catch up to those before us,” he said in his interview with Sky.

“We will try to catch them one at a time.”

With a similar thought, one of the protagonists of the game, the Bosnian Miralem Pjanic, who spoke on Roma’s television channel said, “We lost points at the beginning and now we are getting them back.

“We know that the right place for Roma is closer to the top and we have to continue like this. We have the right mindset.”

The Viola suffered from the absence of David Pizarro in midfield and Stevan Jovetic in attack. They were never really dangerous, with a slow and adrift Luca Toni.

The harmonious and pervasive interplay to which Fiorentina had gotten its fans used to was set off in the subdued interplay of Borja Valero and Alberto Aquilani and was never effective with the long balls.

Montella said to Sky, “Roma forces you to do long runs, but we are accustomed to the short distance. We were forced into a race we are not accustomed to.”

Fiorentina’s goalkeeper Emiliano Viviano signed one of his weakest performances of the year, guilty on both Roma’s first and third goals. Only the splendid performance of Gonzalo Javier Rodriguez, an impenetrable wall, prevented the result from being more tragic for the Viola.

In Roma’s team excelled a ubiquitous Miralem Pjanic who, out of his classical position, gave no respite to the defense of the Viola, sparking thrilling exchanges in the attacking area.

Roma’s captain Totti never faltered during the whole game; he took the ball to give room to his companions when it was needed, he won fouls, and he led his team in attack with accurate service for Mattia Destro and American Michael Bradley.

The home side took the lead after the seventh minute with defender Leandro Castan finishing a ball crushed to the ground by the head of the Greek Panagiotis Tachtsidis. Totti had sent in the cross to Tachtsidis to start the goalscoring play.

Since the early minutes, the game came to life and the pace remained high throughout the match. The pressure was high on both sides with lively and continuous restarts, which gave no breath to reporters and fans, in what has been called “the best match of the championship.”

Roma had the better performance, but the Viola managed to tie in the 14th minute through defender Facundo Roncaglia. The Argentine player took a pass from Rodriguez in the area on a set piece from outside the box by Borja Valero.

But the partnership for the Viola between Juan Guillermo Cuadrado often was inconclusive as he was playing too close to his strike partner Toni.

In the 19th minute, Roma took the lead again thanks to Totti. The Viola defense was two against two, but Mattia Destro found the captain, who scored with the outside of his right foot.

Often the attacking moves of Zeman’s team led to battles of two-on-two, and three-on-three, constantly leaving the Fiorentina defense in trouble.

The Viola’s goalkeeper seemed to redeem himself in the 37th minute, rejecting a treacherous shot from Pjanic, then in the 43rd from ex-Siena player Destro. But, only three minutes later he committed a mistake which gave Roma a 3–1 lead.

Totti fired a shot from 35 meters and Viviano could only flap aimlessly at it.

In the second half, Roma returned to play a bit distracted and got caught off guard in the first minute. Valero found the substitute Mounir El Hamadaoui alone in the middle of the area and he put a header past Roma goalkeeper Mauro Goicoechea.

Fiorentina seemed to have found the balance of the game in midfield, but it was Roma that owned the game with an all-out Totti that thrilled the Olympic Stadium. The counter-attacks followed one another and the dangers thwarted by both teams near their goal were many.

In the 88th minute, Totti turned into the playmaker once again for Pablo Osvaldo, who scored the final Roma goal.

Now great expectations build for the big match between Inter and Napoli on Sunday.