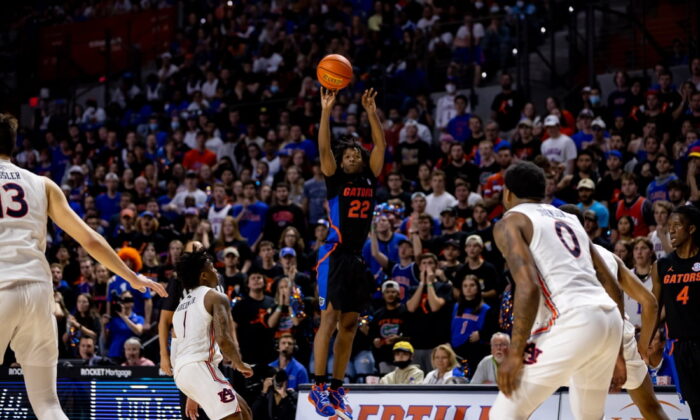 Florida’s Tyree Appleby scored 20 of his team-high 26 points in the second half as the Gators held on to beat No. 2 Auburn for the 14th straight time at home, stunning the Tigers 63–62 Saturday in Gainesville, Florida.

By beating the Tigers, Florida defeated its highest-ranked opponent ever on its home floor. Colin Castleton notched 19 points and eight rebounds for the Gators, whose last home loss against Auburn was on Feb. 10, 1996.

Gonzaga clinched with two games remaining, earning at least a share of the conference title for the 10th straight year and 21st time in Mark Few’s 23 seasons as coach. PJ Pipes scored 27 points on 10–of–12 shooting, and Jalen Williams had 15 points for the Broncos (18–10, 8–5).

Bennedict Mathurin finished with 24 points, seven rebounds and five assists to help the Wildcats come back to beat the Ducks in Tucson, Arizona.

The Wildcats (24–2, 14–1 Pac-12) won their eighth consecutive game and denied the visiting Ducks (17–10, 10–6) what would have been a valuable upset victory to bolster their fading NCAA Tournament hopes.

Quincy Guerrier, who finished with 21 points for Oregon, hit a 3-pointer to cut Arizona’s lead to 83–81 with 15 seconds left, and Arizona’s Dalen Terry missed one of two free throws. But the Ducks’ Will Richardson, who led the team with 22 points, lost his balance, and his last-ditch shot was blocked by Arizona center Christian Koloko as time expired.

The Wildcats turned around an early 13-point deficit to beat the Crimson Tide in a key Southeastern Conference matchup in Lexington.

Kentucky (22–5, 11–3 SEC) was playing without two of its top three scoring guards due to injuries to TyTy Washington Jr. (leg) and Sahvir Wheeler (wrist), but Kellan Grady stepped up with a season-high 25 points and went 7 of 9 on 3-pointers. The nation’s leading rebounder, Oscar Tshiebwe grabbed 14 more, and scored 21 points for Kentucky.

Alabama (17–10, 7–7) received an outstanding shooting effort from Keon Ellis to help stay close in the second half. For the game, Ellis went 10 of 16 from the floor and hit seven 3-pointers, scoring a career-best 28 points to lead all players. Jaden Shackelford added 18 points.

The Jayhawks drained 18 of 22 free throws, while shooting 48.1 percent from the floor. The Mountaineers shot just 27.9 percent and got dominated on the glass, 49-32, while getting outscored 40–12 in the paint. Sean McNeil scored 18 points and Taz Sherman added 16 for West Virginia.

Jeremy Sochan matched his career high of 17 points and Matthew Mayer scored 16 to help the host Bears post a victory over the Horned Frogs in Big 12 play at Waco, Texas.

Kendall Brown tallied 13 points as the Bears (22–5, 10–4 Big 12) defeated the Horned Frogs for the second time this season. James Akinjo recorded 11 points and eight assists and Flo Thamba contributed 10 points and eight rebounds for Baylor in the wire-to-wire victory.

Paolo Banchero scored 17 points to lead six players in double figures as the Blue Devils cruised past the Seminoles at Durham, North Carolina.

Duke (23–4, 13–3 ACC) moved a game ahead of Notre Dame, which lost earlier in the day at Wake Forest, atop the ACC standings. Wendell Moore Jr. finished with 16 points.

Eric Dixon and Caleb Daniels contributed 10 each, and Collin Gillespie had nine points, 10 rebounds and five assists for the Wildcats (21–6, 14–3 Big East).

Bryson Williams scored 17 points as the Red Raiders came on strong in the second half and held on late for a road win over the host Longhorns in Austin, Texas.

The Red Raiders (21–6, 10–4 Big 12) led by 10 points on two free throws by Clarence Nadolny with 3:38 to play before Texas roared back, forging a 9–0 run capped by Andrew Jones’ 3-pointer with 1:36 remaining. Kevin Obanor then hit a pair of free throws with 1:10 left to push Texas Tech’s advantage to three points.

Jones led all scorers with 20 points while Christian Bishop grabbed 11 rebounds for the Longhorns (19–8, 8–6), who have lost two of their past three games.

Kofi Cockburn scored 27 points and Jacob Grandison added a season-high 24 as the Fighting Illini joined Purdue atop the Big Ten standings by holding on for a win over the Spartans in East Lansing, Michigan.

Cockburn finished one rebound shy of his school-record 43rd double-double for the Illini (19–7, 12–4 Big Ten), who never trailed as they swept the season series with the Spartans. Trent Frazier, who finished with 12 points, swished a 3-pointer with 23 seconds left to stop Michigan State’s desperate comeback attempt.

David Singleton and Jaylen Clark each scored career highs with 22 and 25 points, and the Bruins cruised past the Huskies in Los Angeles.

Jaylin Williams scored 13 points with 16 rebounds as the Razorbacks held on for a victory over the Volunteers in a matchup of top-four Southeastern Conference teams at Fayetteville, Arkansas.

Williams delivered his ninth double-double of the season. JD Notae also scored 13 points as the Razorbacks (21–6, 10–4) moved into a tie for third place in the conference with the Volunteers (19–7, 10–4) by winning for the 11th time in their last 12 games.

Tennessee lost for the first time in SEC play since Jan. 15, when it was drubbed at Kentucky. The Volunteers saw their five-game winning streak come to an end.

Keegan Murray scored 20 of his 24 points in the first half and twin Kris Murray had all 11 of his points in the second as the Hawkeyes upset the Buckeyes in Columbus, Ohio.

KJ Williams’ three-point play with 10.2 seconds remaining lifted the Racers past the Skyhawks in an Ohio Valley Conference matchup in Martin, Tenn.

Williams finished with 16 points and nine rebounds for the Racers (26–2, 16–0), who extended their winning streak to 16 games by overcoming a five-point deficit in the final 3:18. Tevin Brown scored 18 points on 5–for–12 shooting from beyond the arc.

Hunter Maldonado had 29 points and Graham Ike finished with 27 points and 12 rebounds to lead the host Cowboys to a victory over Air Force in a Mountain West game at Laramie, Wyoming.

Tyler Polley and R.J. Cole scored 16 points apiece to lead the host Huskies to a victory against the Musketeers in Big East Conference play in Storrs, Connecticut.

Adama Sanogo added 15 points and nine rebounds and Tyrese Martin had 11 boards and six points for the Huskies (19–7, 10–5 Big East), who won their third straight game.

A comeback effort in the second half fell short for the Musketeers (17–9, 7–8), who lost their second straight game after falling behind by 17 points at halftime.