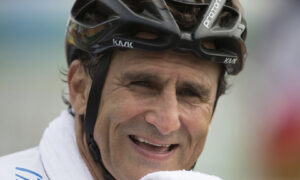 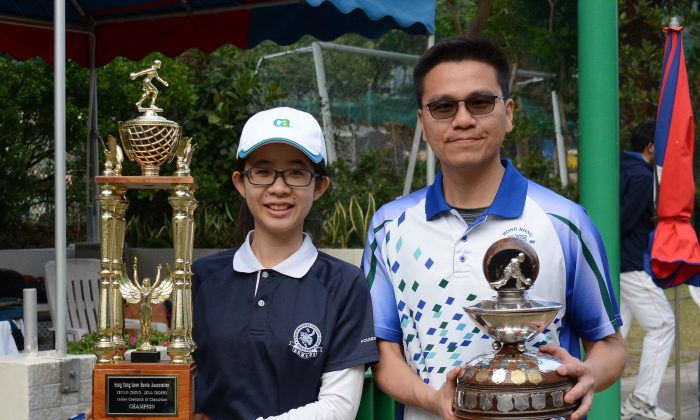 Tony Cheung (R) and Angel So showing their Champion of Champions trophy after prevailed in their respective finals last Sunday (Feb 11). (Stephanie Worth)
International

In the current season Cheung has won the National Singles, Mixed Fours and Indoor Pairs.  He was runner-up of the Knock-out Singles and National Triples.  He also won a silver medal in the Singles and a bronze in the Triples at the 2017 Asian Championships.

Cheung entered this year’s CoC as the defending champion as well as the National Singles champion.  He defeated U25 Singles champion Jason Choy in the semi-finals to face Howard Poon from Indian Recreation Club in the final.

Cheung started the final with confidence and just took six ends to quickly open up a lead of 8:1. Poon gradually got into the game and started to display a high level of drawing skill. In a number of ends, Poon’s close shots forced Cheung to take more aggressive shots to break the head.  His lead was cut to two points in the ninth, twelfth and seventeenth ends.

In the eighteenth end, Poon again displayed good quality drawing and held four shots after finishing bowling.  Cheung decided to play his final shot heavily. Despite hitting his own bowls 2M in front, the bowl in the original course followed-through with power to take out the closest bowl and rest as the shot bowl.

Cheung believed that his consistency has won him the title, “I did not put any pressure on myself for this title so I just performed my usual standard. Poon drew really well today and in some of the ends I need to play some heavy shot to break the head. It was lucky that some of the shots got the results I needed.”

In the women’s section, 24 years old Angel So became the second U25 Singles champion to lift the CoC title, followed Vivian Yip’s footstep in 2013.

So faced 2016 Bowler of the Year and National Singles champion Dorothy Yu in the final.  She drew really well in the final and led from the start of the game and the biggest winning margin was 10:2 at the seventh end. Yu re-focused and pulled the scoreline to 14:10 after the fifteenth end.

In the following end So was again holding two shots when Yu has the last bowl to play.  Her bowl narrowly missed the shot and So added the last shot calmly to win the game.

So thought that her drawing was good in the final, “The green is difficult to play on but it affected both players. My preference of playing narrowly may suit the green more and I just needed to stay focus on adjusting the weight. Staying calm when Yu chasing up is also important for me to win it at the end.”

In addition to the CoC title, So also won the National Pairs this year.  Her next challenges will be representing Hong Kong in the World Youth Championship in Australia at the end of the month.