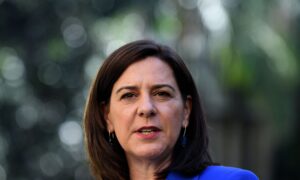 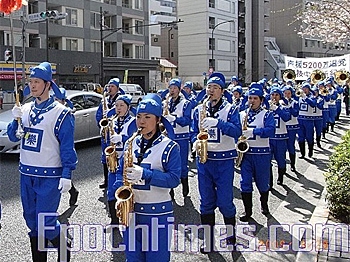 By Zhang Benzhen
Print
TOKYO—On March 29, over 200 Chinese and Japanese public gathered for a parade to the city’s Ebisu Park. The parade supported the 52 million people who have withdrawn from the Chinese Communist Party (CCP) and its affiliated organizations.

The parade was organized by the Tokyo Global Service Center for Quitting the CCP. Falun Dafa’s Divine Land Marching Band led the parade, attracting lots of attention from pedestrians. The end of the parade featured a waist drum team dressed in a Chinese folk costume.

As the colorful display made its way to the Chinese Embassy in Tokyo, passers-by could see large pictures, posters and banners illustrating their message. Parade participants distributed the truth-clarifying materials exposing the CCP’s savage crimes against people and its atrocities of persecuting Falun Gong.

Meanwhile information on how to withdraw from the CCP and its affiliates was broadcast to pedestrians. Information was also broadcast on the evil activities of CCP Standing Committee of Political Bureau member Li Changchun, who aided in the persecution Falun Gong by following Jiang Zemin and just arrived in Tokyo for his official visit.

The Quitting the CCP Service Center representative Kunio Sato said that Li Changchun is one of Jiang Zemin’s accomplices to torture and genocide in the persecution of Falun Gong practitioners. Kunio explained that Li obtained his position in the CCP Standing Committee for his assistance in the brutal crackdown. Kunio declared that Japan should not accept Li’s visit to help stop human rights violations and the persecution of Falun Gong in China.

One parade watcher, 70-year-old Ms. Li said she and a dozen companions came from Sendai City to attend the parade. “I’m very happy to have a chance to tell the people that Falun Dafa is good,” she said, adding that even after walking for two hours she was still not tired. She also condemned Li Changchun for his contribution to the persecution of Falun Gong.

Many spectators packed the streets. Some spectators followed along with the demonstration while others took out cameras and camcorders to save images of the scene. They applauded the event, even joining in to support.

The performance, before the parade started, by the Divine Land Marching Band at the Ebisu Park had also attracted many people. An old couple traveled from Hong Kong took several pictures of the performance, explaining that they had often seen similar events in Hong Kong where they showed their support very much. They were joined by several other Chinese people who came to the nearby park to take pictures and collect the leaflets.