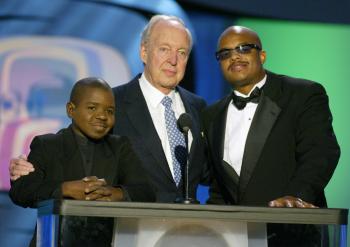 Actors Gary Coleman, Conrad Bain and Todd Bridges on stage during the TV Land Awards 2003. Bridges made a recent comment regarding the death of Gary Coleman. Bridges is now the only surviving cast member of the three children from 'Different Strokes.' (Kevin Winter/Getty Images)
Entertainment

By James Bishop
Print
Todd Bridges, known for his role as Willis on Different Strokes, made a recent comment regarding the death of Gary Coleman. Bridges is now the only surviving cast member of the three children on the show.

Bridges made a brief comment to the Associated Press after Coleman died from a brain hemorrhage in Utah on Friday. Bridges was the subject of Coleman’s catch phrase on the show, “Whatch'a talkin' about Willis?”

"It's unfortunate. It's a sad day … It's sad that I'm the last kid alive from the show,” Bridges told the Associated Press.

Coleman and Bridges had a female costar on the show that played the third child, named Kimberley, in the television family. Kimberley was played by Dana Plato. Plato died in 1991 from a drug overdose that was linked to depression and later ruled a suicide. She was 34.

Plato was not the only member from the show to have problems with depression and drug use. Coleman slipped into a depression after some financial problems involving his family. Bridges battled publicly with substance abuse problems but is now sober, reported US Magazine.

Different Strokes was based on three children from an underprivileged area in Harlem who were adopted by a wealthy family. The high contrast among the children’s histories and their new environment was featured frequently in the plot lines of the show.

Different Strokes was on the air from 1978 to 1986. The show attracted solid ratings before being syndicated and finally cancelled. Coleman died with his wife Shannon Price by his side at the age of 42.