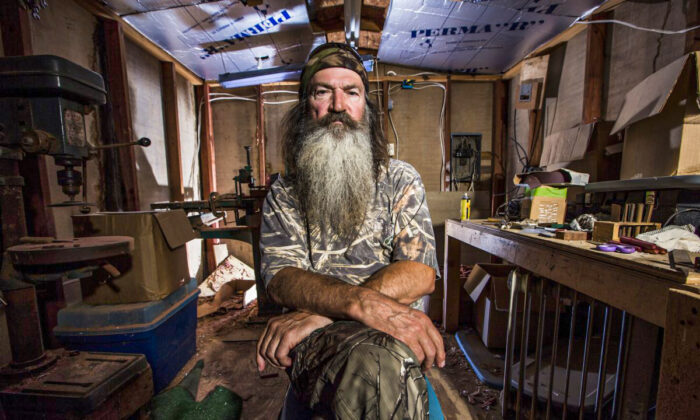 This undated image released by A&E shows Phil Robertson from the popular series "Duck Dynasty." Robertson was suspended for disparaging comments he made to GQ magazine about gay people but was reinstated by the network on Friday, Dec. 27. In a statement Friday, A&E said it decided to bring Robertson back to the reality series after discussions with the Robertson family and "numerous advocacy groups." (AP Photo/A&E,)
Cancel Culture

In his new book, “Uncanceled: Finding Meaning and Peace in a Culture of Accusations, Shame, and Condemnation,” Duck Dynasty’s Phil Robertson reflects on his Christian faith and being canceled. He urges people to look inward and find forgiveness.

“I don’t hate anyone who curses me or tries to cancel me. I don’t hate anybody on planet Earth,” Robertson told EpochTV’s Crossroads program on Feb. 14. “So, they tried to cancel me, but that’s not the reason I wrote the book. I’m just trying to get the human race to think seriously about loving God and loving each other.”

In 2013, Robertson was criticized in the mainstream media and canceled for making statements against homosexuality.

“Well it doesn’t make any difference what I believe,  I just quoted a Bible verse. First Corinthians six, nine, and 10. ‘Don’t be deceived, neither the sexually immoral, the idolaters, the adulterous, the male prostitutes, the homosexual offenders, the greedy, the drunkards, the slanders, the swindlers, they will not inherit the kingdom.’”

“Wasn’t the question about whether I love them or not, I love them all. We study with them all the time, they’re brothers. So, from that, it hits the news cycle, and for about three weeks, they didn’t know that it was a Bible verse I just quoted. So I’m sitting there and watching TV and they’re out there scowling me, and I just kind of shook my head.”

In a statement, The A&E network responded to Robertson’s comments. “His personal views in no way reflect those of A&E Networks, who have always been strong supporters and champions of the LGBT community.”

Robertson believes forgiveness is a key element in defusing cancel culture, and that no one is free of mistakes.

“It’s pretty well, and not even three strikes and you’re out. It’s one strike, and you’re out. You made a mistake, we got you, and then they try to ruin your life,” said Robertson. “And if everyone would not retaliate and would forgive anybody, whatever they said or did, we all sin, all of us. So, when you have sinners accusing other sinners? So what’s their point? In other words, everybody, when they get old enough to know better, they all break the [Biblical] law.

“Whatever other commandment there may be, it’s summed up … in one roof, love your neighbor as yourself. And here’s the kicker, love does no harm to its neighbor.”

Cancel culture has been described by some as a new religion because those in mainstream media, academic, and governmental organizations believe they have the truth, and anyone who doesn’t share that truth is a bad person and they think they are justified in getting rid of them.

Robertson suggests that all great cultures collapsed because they stopped believing in God and caring for each other.

Robertson criticized the riots that plagued American cities in 2020, where some protests against the killing of George Floyd turned violent, with people burning, looting, and assaulting police.

Robertson thinks if people put their faith in God instead of wealth, reputation, and the government, they would not be so afraid of cancel culture.

“They slam you just because you don’t agree with whatever ideology or whatever flag they’re flying. So, it strikes fear in people. It scares them the death, ‘these people are going to ruin me.’ But if you’ve already given it up, and don’t care whether you have it or not.

“If we just did what God said, it would be a wonderful place to live. Unfortunately, we have the evil one, satan, and he’s up to no good,” said Robertson. “I don’t mind the curses and all that. It really doesn’t bother me at all. I love them, forgive them. It’s a good way to roll my man.”