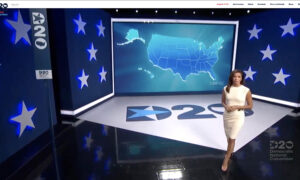 Are All Presidential Conventions Going to Be Infomercials Now?
0 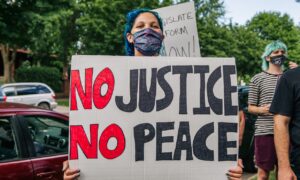 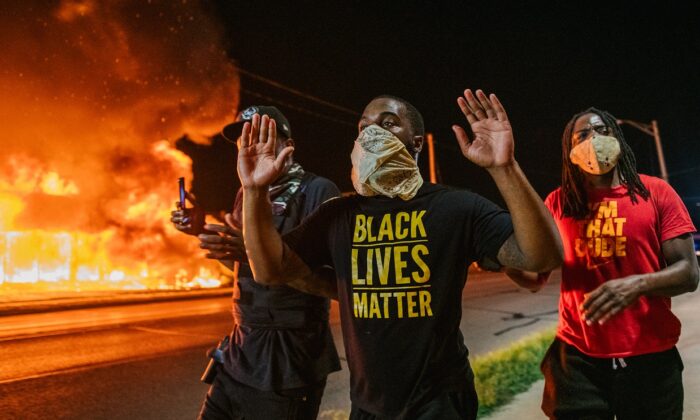 Men walk toward law enforcement with their hands up in Kenosha, Wis., on Aug. 24, 2020. (Brandon Bell/Getty Images)
Viewpoints

For a variety of reasons, from what Shelby Steele described so clearly in “White Guilt” to Lyndon Baines Johnson’s Great Society that he famously said would keep the “n-words” voting for us (the Democrats) for decades, the Democrats have ignited a culture of victimhood and excessive welfare reliance among African Americans that led to the literal decimation of the black family to 25 percent two-parent homes today from 75 percent in 1965.

There were actually more two-parent homes among blacks than whites before this all started.

If you don’t see the causal connection between this familial decline and what’s going on in Kenosha, Wisconsin, and dozens of other places—how many of the rioters grew up with fathers in the home?—you are, in Andrew McCarthy’s words, “willfully blind.” (In the case of Kenosha, it’s possible that rioters were actually bused in.)

The patriarchal instinct behind all this is, in essence, racist.

I know because I participated in it myself during the civil rights movement when I was an ardent Democrat. Doing voter registration of black field workers, many of whom were illiterate, I registered them in the Democratic Party without asking their preference or even explaining the alternatives.

This was still the era of the Dixiecrats, and a greater percentage of Republicans than Democrats had voted for the Civil Rights Act of 1964, but I, the Northerner, knew better. I was actually infantilizing them. (I was also breaking the law.)

We all saw this infantilization in action recently when Joe Biden made the idiotic statement that if you weren’t voting for him, you weren’t black. (Heavily criticized, he eventually walked this back.)

Even well-intentioned ideas such as affirmative action have more than slight overtones of infantilization, reparations yet more so. Imagine, for example, Armenians arriving in the United States circa 1920 to escape the massive genocide of their people, having to pay for events that occurred 75 years before their arrival. It’s absurd.

The Democrats are outraged, not surprisingly, by any suggestion that their reactionary identity politics is anything but “progressive.” (Few of them realize that the former Soviet Union practiced identity politics to the nth degree, with required internal passports identifying every one of its citizens as Tatars, Kazakhs, Abkhazians, Jews, and so forth.)

The extreme divisiveness emanating from this identitarian bias is obvious and, in turn, helps create … Kenosha.

Which leads us to one of the great mysteries of our time. Why hasn’t Biden himself strongly disassociated himself from the violence in our streets? Other than going through a spokesperson, the candidate’s own statements have been, at best, mealy-mouthed.

A true Sister Souljah moment, at least, would seem to be in order, but, no Bill Clinton, he just doesn’t seem to be capable of that so far.

Perhaps it’s because to do so would tacitly be admitting that the Dems’ approach to racial justice has been wrong. A whole elaborate, and financially lucrative, complex would be under threat. (Well, if not under threat, under question.) As H.L. Mencken reminds us, “It’s about the money.”

Or perhaps something psychological is going on, a kind of mass personality disorder. The Democrats have convinced themselves for years that they’re doing good for minorities, but nothing much has changed for these same minorities—Watts remained Watts—until the dreaded Trump came along and black and Hispanic unemployment went down to all-time lows.

How to explain it, other than that “Trumponomics,” as it’s called by Arthur Laffer and Steve Moore in their book, actually worked?

Meanwhile, many Democrats were all exercised about the frequent appearances of black people during the Republican convention, including, of course, Sen. Tim Scott who, with Trump, has been putting into action the old Jack Kemp “opportunity zones” idea, and the national debut of Kentucky Attorney General Daniel Cameron, a certain future star of the Republican Party, if he isn’t already, who, in his eloquent speech, made short work of identity politics.

How this will play out at the ballot box, we will soon see. But a significant black vote for Trump may force the Dems to reevaluate infantilizing African Americans. Or not.

Roger L. Simon is an award-winning author of fiction and non-fiction, Oscar-nominated screenwriter, and co-founder of PJ Media. He is now a columnist for The Epoch Times. Find him on Parler and Twitter @rogerlsimon. Find his books on Amazon.