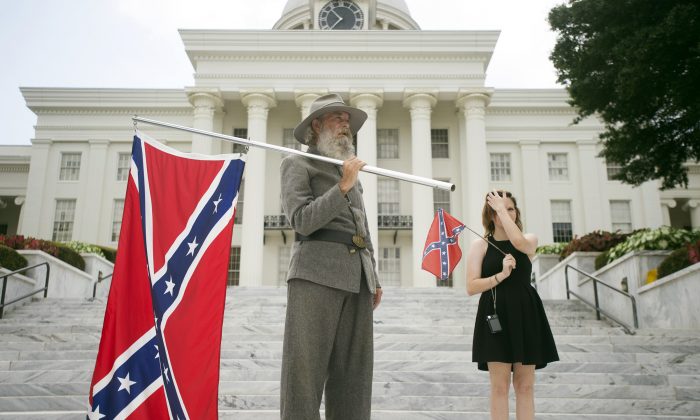 In this Saturday, June 27, 2015 file photo, Dan Williams, 65, of Ashville, Ala., holds a Confederate flag while standing with his daughter Bonnie-Blue Williams, 15, in front of the Alabama State Capitol building during a Confederate flag rally in Montgomery, Ala. ((Albert Cesare/The Montgomery Advertiser via AP)
US

BIRMINGHAM, Ala.—Across the South, Confederate symbols are toppling, teetering, or at least getting critical new looks. But is it a sign of real change in a region known for fiercely defending its complex traditions, or simply the work of frightened politicians and nervous corporate bean counters scrambling for cover in the wake of another white-on-black atrocity?

Probably a bit of both, said author Tracy Thompson. “But, so what?”

“I’m sure there’s a lot of expedient backtracking going on,” said Thompson, who wrote “The New Mind of the South.” “If it’s going in the right direction, who cares?”

One who does care is the Rev. Joseph Darby—a longtime friend of Clementa Pinckney, one of nine slain during a Bible study at a black church in Charleston, South Carolina. And he thinks it’s a bit premature to declare this a new “New South,” as some commentators have suggested.

“Taking down those flags is not that big a deal,” he said of Gov. Nikki Haley’s call to remove the Confederate battle flag from the Statehouse lawn and Alabama Gov. Robert Bentley’s order Wednesday to take down four rebel banners from a memorial at his capitol. Some citizens have long taken offense to the flags, which they associate with racial conflict.

“There are a few other things on the agenda,” Darby said, including improving public education and equal justice. But Darby, who has been fighting since 1999 to bring down the Confederate flag, said, “I think it’s a first step that hopefully will lead to real change. If nothing else changes, it’ll ultimately be cosmetic.”

Still, even skeptics like Darby have to concede that the speed and geographic spread with which these developments have occurred are nothing short of historic. Governors in Virginia and North Carolina said the battle flag should come off specialty license plates; Georgia has stopped issuing the plates, and a bill to do the same was introduced by a Tennessee legislator; Arkansas-based Wal-Mart vowed to stop selling all Confederate gear.

“I’m looking for snow in South Carolina any day now,” Darby deadpanned as the temperatures hovered near triple digits.

“One of the ways the South changes is through embarrassment, or through some incident,” said Ferrel Guillory, an expert on Southern culture at the University of North Carolina at Chapel Hill.

“Something dramatic happened—something tragic that stunned people,” said Guillory, director of UNC’s Program on Public Life. “And it’s got them to move.”

But people said the same things in 1955, when 14-year-old Emmett Till was kidnapped, tortured, shot and tossed into a Mississippi river with a cotton gin motor around his neck.

They said it again in 1963, when a Ku Klux Klan bomb tore through Birmingham’s 16th Street Baptist Church, killing four black girls on a Sunday morning.

Yes, those crimes helped galvanize the civil rights movement and pave the way for the Civil Rights and Voting Rights acts. But challenges to Jim Crow also prompted states like South Carolina to hoist the Confederate battle flag atop their capitol domes in defiance, said James C. Cobb, a professor of history at the University of Georgia.

“There were plenty of white Southerners all during the civil rights movement who knew deep down that supporting what was going on—not only supporting racial discrimination, but supporting violence and the kinds of forms of resistance that white Southerners were putting up—was wrong,” said Cobb, author of the book “Away Down South,” about the region’s identity. “But they kept eyeing each other, hoping that somebody else would be the one to make the first move. And so it took forever and ever and ever for that to happen.”

In his less cynical moments, Cobb hopes that Alabama’s Bentley and South Carolina’s Haley were just watching the tectonic shifts happening in the South and “were just waiting for this crack to widen a little bit so they could step through it.” Outside business investments across the region may influence how some Southern leaders see old symbols now. After the flags came down at his order, Bentley announced a new Google facility in Alabama and commented that a flag was “not worth a job.”

“Economic interests … political interests, and … the moral imperative were all kind of pushing in the right direction,” Cobb said.

Demographic shifts have also brought change. A century ago, when the KKK was reborn and Jim Crow laws reigned, virtually all Southerners were born, lived, and died in the same state. In 1900, census figures show, the populations of each Southern state were at least 90 percent native, and in several it was more than 95 percent. By 2010, only 56 percent of the 115 million people living in the region were actually born in their state of residence—far fewer than in the Northeast or Midwest. The influx of Northern transplants and remigration of blacks who’d fled to the Rust Belt helped President Obama win once solidly Republican states such as North Carolina in 2008, though he narrowly lost there four years later.

Across the South, many elected offices are now held by blacks.

I don’t think the younger generation has been spoon-fed the ‘Lost Cause’ narrative the same way people even of my generation were.
— Tracy Thompson, author, 'The New Mind of the South'

In addition, said Thompson, younger Southerners often see things differently. “I don’t think the younger generation has been spoon-fed the ‘Lost Cause’ narrative the same way people even of my generation were,” she said.

When she moved to the South from Chicago 28 years ago, Pat Perkins wasn’t sure what to expect, given the region’s history of racial tensions. The black nurse has been pleasantly surprised.

“Grown (white) men and little boys said ‘yes ma’am’ to me, which I never expected. … I’m accepted,” said the Yazoo City, Mississippi, resident, who was in Birmingham last week chaperoning a group of Girl Scouts to the city’s civil rights museum.

I think the DNA of the South is changing.
— Tracy Thompson, author, 'The New Mind of the South'

Eric Varnell has spent about half of the past 40 years living on the streets of Birmingham. He said there’s real change in the number of whites and blacks he sees walking and talking amicably. “I never used to see that,” the 59-year-old white man said.

The Rev. Jesse Jackson also noted how blacks and whites united in the aftermath of the church shooting, telling The Associated Press that it is “really time for a new South.”

“This was the most traumatic hit since Dr. Martin Luther King was killed 50 years ago. This could be a defining moment for the American Dream for all its people,” Jackson said.

“I think the DNA of the South is changing,” said Thompson, referring to the legacy of strict racial divisions in law and custom. She grew up attending all-white schools in suburban Atlanta and her book is a kind of reboot of “The Mind of the South,” W.J. Cash’s classic 1941 study of the legally segregated region.

For proof of that change, Guillory said one need look no further than the floor of the South Carolina Senate, where on Tuesday Paul Thurmond, the son of Dixiecrat presidential candidate and U.S. Sen. Strom Thurmond, called for the battle flag’s removal.

“It is time to acknowledge our past, atone for our sins, and work toward a better future,” said Thurmond. Noting that many Confederate soldiers were fighting to preserve slavery, he added, “I am not proud of THIS heritage.”

Beth Summers keeps a battle flag that once flew over the Statehouse dome in a frame beside a sword an ancestor carried during the Civil War. But as a public symbol, the standard is tainted, the 51-year-old Charleston native said.

“We know the true heritage of it, but it’s got a bad name now,” said Summers, who attended the first post-massacre service at Emanuel and joined in a unity march. “It’s just over the years it’s just grown to be a ‘redneck flag.'”

But people like Mike Williams, state adjutant of the Alabama division of the Sons of Confederate Veterans, remain unpersuaded.

As a historian, Ted Ownby is loath to make too much of recent events. For now, he’s of two minds—one hopeful, one cynical.

“I’m hoping that it’s part of … a deeper change and not just … a change for this moment or for this coming election,” said Ownby, director of the Center for the Study of Southern Culture at the University of Mississippi. “That’s me at my most optimistic.”

South Carolina legislators have voted to debate removing the flag from its place of honor on the Statehouse grounds. But it’s not down yet. (Although the flag was taken down briefly by a protester who climbed the flagpole and was then arrested, it was soon raised again by workers.)

“I don’t think we need to be handing out huge medals to Haley and others who are sort of following suit,” said Cobb. “In the context of the South’s history, I suppose it’s a watershed. But it would have been easier to celebrate it as a watershed 20 or 30 years ago.”

If nothing else, Guillory—whose school recently rechristened a building named for a former KKK leader—said removing the flags from the seats of government is “eliminating a source of distraction in the political system. … But it’s not the final turning point either.”

For the Rev. Joseph Lowery, who’s had that battle flag thrust in his face too many times to count, its removal would be something wondrous.

Lowery, who co-founded the Southern Christian Leadership Conference with King, said he always knew the flag would come down. He just wasn’t sure he’d live to see it.

“I never thought I’d see a black president,” he said from his home in Atlanta. “But I have. And God has so willed it.”

Like Thompson, the 93-year-old activist doesn’t “give a rap” what motivations are behind all this, “as long as it changes.”