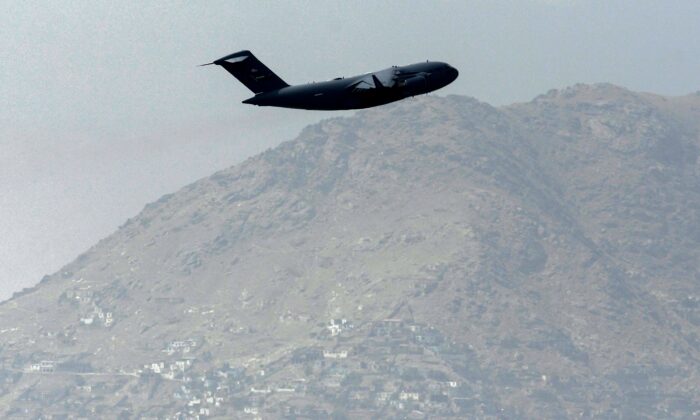 A U.S. Air Force aircraft takes off from the airport in Kabul on Aug. 30, 2021. (Aamir Qureshi/AFP via Getty Images)
Viewpoints

Time to Hold Our Leaders Accountable for Afghanistan Fiasco

Plenty of people have pointed out what went wrong in Afghanistan, but far too few people have asked who should now be held accountable for this national disgrace.

The debacle in Afghanistan should be setting off alarm bells in Washington. We surrendered the country that we’d been defending to a seventh century tribe, which had endured immense casualties and was unable to defeat the United States on the battlefield. But the Taliban was able to defeat America politically and psychologically.

In a healthy country, the Taliban takeover would be a real crisis—one that causes a fundamental rethinking within the Pentagon, State Department, and intelligence community about how they’ve been operating.

How can we have spent 20 years, thousands of lives, and trillions of dollars and then lose to a band of medieval thugs with no air force? This is the kind of question the generals, diplomats, and analysts should be asking in the halls of government.

It’s troubling how unphased many of our leaders appear to be, especially the principals of the Biden administration. What they don’t seem to understand—or perhaps worse, don’t recognize the importance of—is that what happened in Afghanistan isn’t just about Afghanistan.

China, Russia, Iran, North Korea, other jihadists—they’re all taking note of what’s transpired over the past several weeks. The world now sees America as completely unreliable. We need to show that we’re both reliable and dangerous.

Accountability is absolutely crucial to come to grips with how big a problem this is and to reestablish respect among allies and enemies. The leaders who, through their shameless incompetence, threw away two decades of sacrifice in a matter of days, left Americans behind enemy lines, betrayed our Afghan allies, and left Afghanistan to reemerge as a terrorist haven must be held responsible.

Someone who’s trying to hold these people accountable is retired Maj. Gen. Joseph Arbuckle, a decorated veteran who first entered the Army in 1969. Currently, Arbuckle is the founder and spokesperson of Flag Officers 4 America, an organization of retired military officers dedicated to supporting and defending the Constitution against all enemies, foreign and domestic.

Flag Officers 4 America just organized an open letter from retired generals and admirals regarding Afghanistan. The letter, signed by Arbuckle and 160-plus retired military leaders, demands accountability for the botched withdrawal and for both Secretary of Defense Lloyd Austin and Gen. Mark Milley, chairman of the Joint Chiefs of Staff, to resign for their handling of the situation.

Arbuckle told me why he wrote the letter and analyzed the scene in Afghanistan last week on my podcast, “Newt’s World.” As the general explained, this was a difficult decision, but accountability is a foundational principle of the military. President Biden’s military advisers knew the fiasco that would ensue by not extending the Aug. 31 withdrawal deadline. When Biden decided to push ahead with his plan, Arbuckle said, Austin and Milley had two choices: resign in protest or follow the order and take responsibility for the outcome.

Unfortunately, no one is taking responsibility—not Biden, not Austin, not Milley. And the nation will suffer as a result, with its leaders refusing to learn lessons from their failures. This should be unacceptable to the American people.

For those interested, Flag Officers 4 America recently partnered with the Committee to Support and Defend so that civilians and veterans who are non-flag officers can also have a voice and sign onto similar letters to the one organized by Arbuckle.

As Arbuckle and I discuss, with our military leadership focusing on critical race theory rather than warfighting, the country is in trouble. Holding leaders accountable is the first step to getting us back on track—and earning back the respect of the rest of the world that was lost in Afghanistan.