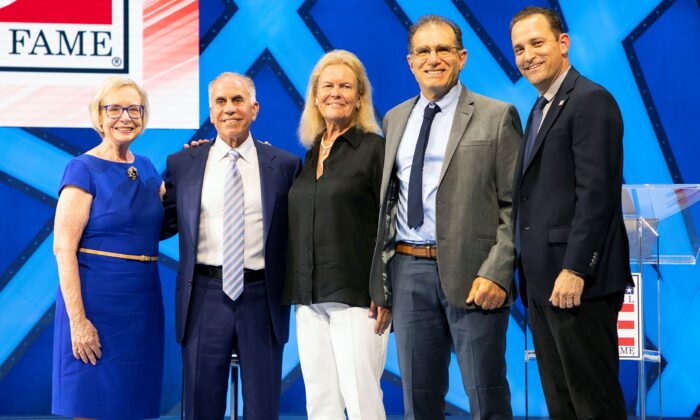 COOPERSTOWN, N.Y.—Writer Tim Kurkjian and the late Jack Graney, the first former major league player to transfer to the broadcast booth, were honored Saturday by the Baseball Hall of Fame for their contributions to the game.

Kurkjian was presented with the Baseball Writers’ Association of America’s Career Excellence Award. He began his career in 1979 at the Washington Star and two years later was the Texas Rangers beat writer for The Dallas Morning News. Four years later, he returned to his native Maryland and joined The Baltimore Sun, covering the Orioles for four years. He then spent seven years as a senior baseball writer at Sports Illustrated.

“It’s such an honor to be here,” said Kurkjian, who moved to broadcasting at ESPN in 1998. “This has been the most overwhelming, most overpowering experience of my life. That love for the game, not in any sort of grace or talent, has carried my career. It was a privilege to cover the game 40 years ago, and now 40 years later, it is still a privilege. Baseball is the greatest game.”

Graney was honored posthumously with the Ford C. Frick Award for broadcasting, but he started his career on the field for Cleveland and was the first major league player to bat against Babe Ruth (1914). He finished a 14-year playing career in 1922 and after a stint in automotive sales was hired in 1932 by Cleveland radio staion WHK to call games. He spent 22 years calling them for several stations and is now widely considered to be the first former big league player to broadcast a major league game.

Graney, who also called the 1935 World Series for a national audience in 1935 and that year’s All-Star Game in Cleveland, died in 1978.

“If Jack were here today, he would never tell you about his accomplishments,”she said. “He was such a humble man. And he probably was embarrassed by praise. Here’s how Jack described his career. He said, ‘I always tried to give the fans an honest account. It was a tremendous responsibility. And at all times I kept in mind that I was the eyes of the radio audience. I just tried to do my best and I hope my best was good enough.'”

Also Saturday, more than 50 Hall of Famers took part in the annual Parade of Legends. Chairs were lined up four deep on Main Street more than four hours before the parade began. Inside the Hall of Fame’s Plaque Gallery, several fans dressed in Red Sox gear stopped to take photos at the spot where the plaque of former Red Sox slugger David Ortiz, affectionately called Big Papi, will hang after his induction.

Thousands of Red Sox fans lined the route through the village center, many wearing Big Papi’s No. 34 on the back, and about 20 were carrying a Domincian Republic flag and chanting “Papi! Papi!” Several souvenir tables were set up with Ortiz induction jerseys in red and blue.

Ortiz is just the 58th player selected by the Baseball Writers’ Association of America in his first year on the Hall of Fame ballot. He’s part of the seven-member Class of 2022 that will be inducted on Sunday.

Also getting their due on induction day are: Dodgers great Gil Hodges, who managed the New York Mets to their first World Series title in 1969; Minnie Miñoso, a star with the Chicago White Sox in the 1950s; Buck O’Neil, who played for the Kansas City Monarchs in the Negro Leagues and was a tireless advocate for the game; and Bud Fowler, a pioneering player who grew up in Cooperstown in the 1860s and played in more than a dozen leagues.