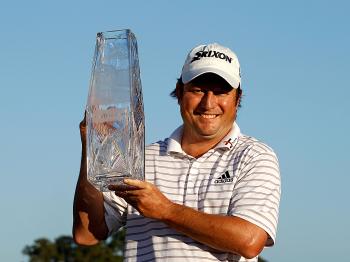 By James Fish
Print
Tim Clark won his first PGA golf tournament at one of the most prestigious events on the PGA tour on Sunday—The Players Championship at TPC Sawgrass.

After 205 tournament starts without a win, South Africa’s Tim Clark scored a 66 on Saturday and a 67 on Sunday to come from 5-under after the second round to finish the tournament at 16-under.

Clark shot five birdies in a bogey-free round, scoring the best weekend score in The Players tournament history.

“It’s been a long time particularly on this tour, about 200 or so tournaments,” Clark told NBC. “I just hoped it would happen one day. I came out today and showed what I could do on the golf course. Obviously I’m really pleased.

“I tried to play away from the flags I couldn’t go at and when I had chances, tried to go to them. I feel like I hit every shot I wanted to today.”

After wishing his mother a happy Mother’s Day, Clark joked about why he decided to enter The Players.

“I must have got some inspiration from watching Rory (Quail Hollow winner McIlroy) a couple of weeks ago. I was on my couch, and I watched him play golf again. So I figured why not go out and try myself?”