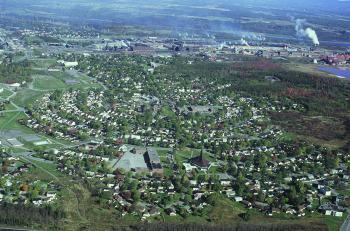 Aerial view of Arvida today, with the smelter and related plants in the background. (Pierre Lahoud)
China

In a Tibetan monastery located 10,500 ft high on the plateau, a new form of education is underway. The Chinese regime calls it “patriotism education,” but for the monks it’s a form of severe persecution.

“This [so called] patriotism education is simply slamming Dalai Lama. The monks are forced to sign a declaration to support communism and the leadership of the Chinese Communist Party,” said Dawa Tsering, representative of the Tibetan Parliament in exile in Taiwan, in a statement to the Voice of America.

On March 16, a young monk from the Kirti monastery of Tibetan Autonomous Prefecture, in Sichuan Province, set himself ablaze protesting the Chinese regime’s repressive rule in Tibet.

On March 21, armed police forces entered the monastery, starting a round of so labeled patriotic education. For those who didn’t comply, it meant beatings, arrests, and being disappeared to unknown jails. Over 300 monks have been arrested.

Those who choose to leave the monastery voluntarily after March, get 10,000 yuan and a 50,000 yuan zero interest loan.

Not one of the around 2500 monks in the monastery, established in 1472, accepted the offer.

“How insignificant are those 10,000 or 20,000 yuan. Even the treasure of the entire world will not sway a true monk’s mind. It is pitiful for a country that does not respect Buddhism. We can foresee their consequences,” Master Yuanji who lives in Chengdu, Sichuan Province, told The Epoch Times, when asked “Will the monks return to the secular world for this[the reward]?”

Lay Buddhist Zeng Xiaoyu says, “It’s simply strange because one’s belief cannot be measured by money. According to Buddhism, everyone experiences many obstacles when one enters the monastery. But urging a monk to leave the temple is like a demon luring the monks away.”

If one signs the declaration slandering Dalai Lama, and praising the communist rulers, one can stay in the monastery. If one refuses to sign, one is expelled from the monastery. Hence, many monks ended up leaving the monastery, some going into exile. If all monks leave, the monastery will be closed down.

The purpose of this harsh treatment is “to educate the monks and prevent infiltration from foreign countries,” Zheng Dui, China’s official scholar and director of the religion department in China Tibetology Research Center, told the media in 2008.

Huang Qi, human rights activist and co-founder of the Tianwang Human Rights Center, told The Epoch Times that the regime uses similar tactics on monks in Tibet, as they use on house church members and practitioners of Falun Gong. The purpose is to force them to give up their belief.

“I met Falun Gong practitioners both times when I was jailed. They conduct themselves according to truth, compassion, and tolerance. One of them was in his 70s. They would not sign any paper nor give up their belief,” Huang said.