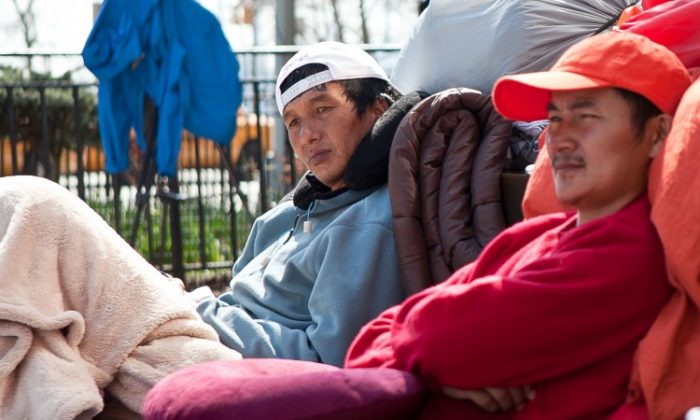 Dorjee Gyalpo with his daughter Deden Gongma in front of the United Nations headquarters on March 13. (Amal Chen/The Epoch Times)
US

NEW YORK—Dorjee Gyalpo, 59, sat with his daughter in front of the United Nations headquarters on Tuesday, reminiscing about summer days in his hometown in Tibet. The landscape has changed under Chinese communist rule.

Gyalpo managed to get news from home, although contact is limited between Tibetans in Tibet and the outside world. Chinese loggers have stripped the landscape, and the monasteries have all been destroyed; one of the monasteries is now a place to keep cattle, lamented Gyalpo.

Gyalpo reached day 21 of his hunger strike on Tuesday, along with Yeshi Tenzing, 39, and His Eminence Shingza Rinpoche, 32. They call on the U.N. to intervene and lift the undeclared martial law in Tibet.

“Personally, emotionally, being a daughter, it’s hard not to …” began Gyalpo’s daughter, Deden Gongma, her voice breaking and tears in her eyes “Looking at the worst scenario that I could lose my dad because of his conviction. … I’m nervous, but in the meantime, not just my dad, but all three of them, their conviction and their strength reassures me.”

She described the situation in Tibet, where peaceful protests are brutally suppressed, where the people have no voice and no freedom. Gongma said compared to that, her father’s suffering is easier to bear because it is chosen in a free country.

At 21 days, the three Tibetans have matched Mahatma Gandhi’s longest hunger strike in peaceful protest. The Tibetans say their strike is indefinite.

They have become weak and frail, but their spirit remains strong, said Gongma.

People can survive 30 to 60 days without food if they remain hydrated, although severe starvation symptoms can manifest around 35 to 40 days, according to Peter Janiszewski, Ph.D., who cited a 1997 editorial in the British Medical Journal and the cases of hunger strikers of the Maze Prison in Belfast in the 1980s.

“Unfortunately, we live in a world where people pay more attention to violence,” said Rigzin. “The Tibetan struggle is a nonviolent struggle.”

In Tibet, protesters have resorted self-immolation, now totaling 25 in the last 12 months.

“We are asking New Yorkers to call their president, their senators, their mayors, [and] their governor. Let them know that you support the peaceful Tibetan people. Let them, through their officials, pressure the United Nations to act,” he said.