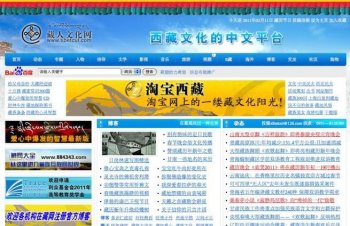 REMOVED: The TibetCul website before it was unexpectedly shutdown on March 16. TibetCul was an independent website focused on Tibetan culture that studiously avoided wading into political issues. (Courtesy of Tibetan Cultural Net)
China

By Matthew Robertson
Print
A prominent Tibetan cultural website in China has been shut down, despite a history of attempting to mollify censors.

TibetCul, a contraction of Tibetan Cultural Net, fostered a community of 80,000 Tibetans and Chinese interested in Tibetan culture. The site was founded in 2003 by two brothers, Wangchuk Tseten and Tsewang Norbu, in Lanzhou, the capital of Gansu Province in northwestern China.

On March 16 the owners wrote on their Sina microblog that they suddenly found it impossible to access their website.

Later, the service provider clarified to Tseten that “higher authorities” ordered the closure but that the “specific reasons” were “confidential.”

The brothers also host a Tibetan travel and encyclopedia website. That site wasn’t closed down, but they were told to submit new applications to run it. “Please everyone tell us whether this is a reasonable legal request?!” Tseten wrote on their blog.

The shutdown is a blow to the small community that enjoys a narrow cultural space carved out by enterprising use of the Internet.

Dechen Pemba, a prominent blogger on Tibetan matters based in London, called it “an immeasurable loss to Tibetan netizens.”

In an e-mail interview with The Epoch Times, Pemba said that TibetCul users “will no doubt become increasingly disillusioned with Internet usage in [China].” While people are used to seeing their posts deleted, or websites temporarily closed, this is different. “A complete shutdown would mean losing up to seven years of content for some bloggers.”

TibetCul was a unique platform for Tibetan netizens to interact and feel united, Pemba says. The closure will push them toward the more homogenous media channels such as Sina and QQ, which do not cater to Tibetans, and are under closer propaganda control by central authorities.

The founders' Sina post about the shutdown attracted a flurry of comments, preserved by Chemba in a pdf file. One user broods: "Cultural oppression will arouse disloyalty."

The editors were aware of the potentially sensitive nature of their independent operation, despite the fact that they forbade political discourse and tried to keep a low profile.

An electronic bulletin board hosted debates of the day—though never ones stepping on the toes of the Chinese Communist Party (CCP).

This principle was illustrated in May 2010, after an earthquake in the Tibetan region of Yushu. Tibetan online citizens were furious with reports of negligent military rescue efforts. The administrators of TibetCul prominently warned users away from saying anything that could be construed as a political statement.

They encouraged observance of “the law of the People’s Republic of China,” and said they would ban users violating those rules.

The reason for the shutdown is unclear. March is known as a sensitive time for Tibetans because it is anniversary to the unrest of 2008, which falls on the 14th. But no other events preceded the shutdown.

The Epoch Times could not discover whether it was part of a general tightening of restrictions on freedom of speech for Tibetans.

Zhen Yun, a veteran of evading censorship in China, said in a recent interview translated by China Digital Times, that requests to shut down websites are only carried out quickly when high-level propaganda officials get involved.

“Some things are no match for the thunderous fury of some leaders,” he said. “When the command of a powerful leader comes down through the ranks, all processes disappear in a puff of smoke.”

Websites so targeted meet with “instant death,” he said.

The TibetCul shutdown was preceded by a propaganda directive to feature an article about "concern and love for Tibetan students," according to China Digital Times .  “For 33 years, 75-year-old Professor Yang Changlin has Shown Concern and Love for Tibetan College Students in Almost 10,000 Instances,” read the headline widely posted on Chinese websites as front-page news.