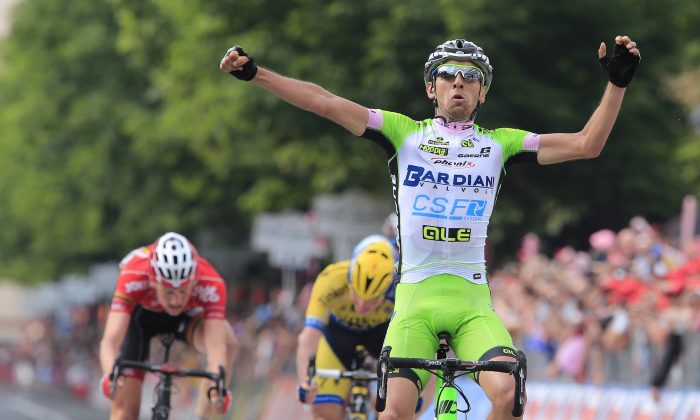 Stefano Pirazzi (Bardiani-CSF) celebrates his victory as he crosses the finish line of the 17th stage of the 97th Giro d'Italia, Tour of Italy from Sarnonico to Vittorio Veneto on May 28, 2014 in Vittorio Veneto. (Luk Benies/AFP/Getty Images)
Cycling

Stefano Pirazzi attacked the breakaway in the final kilometer of Stage 17 to give Bardiani-CSF its third win in the 97th Giro d’italia.

Pirazzi joined the 26-rider break about 60 K into the 208-km stage with three Cat 4 climbs which could have gone to the sprinters or a group of escapees. When an acceptable group of attackers formed, the peloton let it ride away—none of the escapees were threats to Nacer Bouhani’s sprint jersey or Nairo Quinatana’s maglia rosa.

This group started tearing itself apart in the final 45 km, with repeated attacks and counterattacks. Thomas DeGendt of Omega Pharma-QuickStep made the strongest move 2with 29 km left in the stage. Several riders tried to bridge; Pirazzi was the first to succeed, catching the Omega rider at the peak of the final Cat 4 climb.

A few riders crashed on the slippery descent, but all were able to continue. Matteo Montaguti (AG2R,) Jay McCarthy (Tinkoff-Saxo,) and Tim Wellens (Lotto-Belisol) stayed upright and caught the two leaders 15 km from the line; this group stayed together until the final kilometer when Pirazzi made his move. No one responded until the Bardiani rider was too far away to be caught; the other four sprinted for the final two podium positions.

Pirazzi said he knew he had to attack a t the flamme rouge, because he couldn’t hope to outsprint the other breakaway riders. “Coming to the arrival, I knew the last kilometer was where it would count,’ he told beIN Sports.

Pirazzi’s win was the third for Bardiani; Marco Canola took Stage 13 and Enrico Battaglin won Stage 14. Not a bad Giro for a Continental team facing off against the biggest WorldTour teams. On top of that, Bardiani is an Italian team composed entirely of Italian riders—every stage is on home turf, and fans as well as sponsors are eager to see these riders win.

Pirazzi said the team had risen to the pressure to perform. “This is a Giro where we have been going for stage victories and we have got plenty.”

The next three stages feature summit finishes, where the GC contenders will be battling hard, but in any of those stages a Bardiani rider could launch a late attack and get one more for the Italian team.