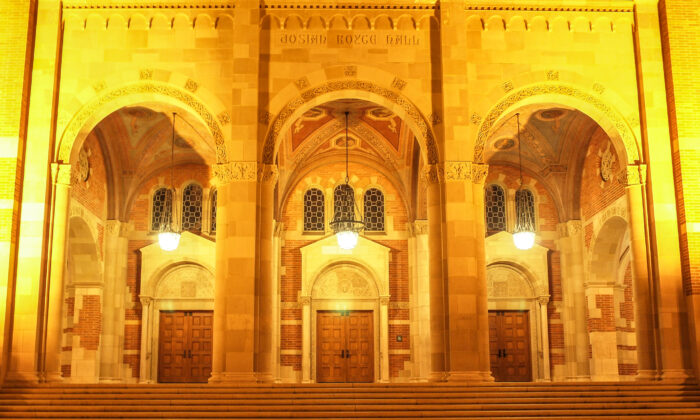 LOS ANGELES—Classes at University of California–Los Angeles (UCLA) were being taught remotely on Feb. 1 in response to a video by a former lecturer referencing a mass shooting and threatening philosophy department members, the university announced.

Matthew Harris, a former postdoctoral fellow, posted the video and an 800-page manifesto making “specific threats” to people in the university’s philosophy department, resulting in the school’s decision on Monday to cancel in-person classes.

“Out-of-state law enforcement has confirmed the person who made threats to UCLA is under observation & not in CA,” Steve Ritea, UCLA’s spokesman, said in a statement to City News Service on Tuesday morning. “Classes will remain remote today.”

“The department worked closely with UCLA Police Department and the FBI to quickly identify and locate this individual we believe responsible for those posts and potentially planning for a mass violence or shooting event at UCLA,” said Moore, who added that the agencies were working to determine if the threat is credible.

“At this point, we believe the campus is safe,” Moore said.

Harris was taken into custody late Tuesday morning in Boulder, Colorado, following a standoff with police that prompted the evacuation of an elementary school. Police also issued a shelter-in-place warning for residents in the area as law enforcement swarmed the area.

Philosophy students received an email on Monday stating that Harris had made specific threats to people in the department and posted a video on social media titled “UCLA Philosophy Mass Shooting,” the Los Angeles Times reported.

“In light of this, we will continue to have discussion through Zoom until the authorities say that it is safe. I will keep you updated on this situation. But I would avoid being anywhere near Dodd Hall or the philosophy department until further notice,” the email states.

Late Monday, UCLA announced that university police were “aware of a concerning email and posting sent to some members of the UCLA community today [Monday] and actively engaged with out-of-state law enforcement and federal agencies.”

In the video, Harris makes references to race and uses several profanities, according to the Los Angeles Times. He included links to his manifesto and videos, including the video threatening a mass shooting.

Some students appeared stunned by the news of the video and manifesto.

In a separate post, another student described Harris’s class as their least favorite at UCLA and said many students had complained to the department about his behavior, the Los Angeles Times reported.

The student said Harris changed someone’s grade 43 times after the end of the academic quarter and had changed their grade three times.

The university on Tuesday made counseling services available to students and staff in response to the threat. Students in need of the services were asked to call 310-825-0768, and faculty and staff can call 310-794-0245.

According to the campus newspaper, the Daily Bruin, Harris was put on leave last spring over allegations that he sent pornographic material to a student, but his position as a postdoctoral lecturer was originally set to expire in June 2021.