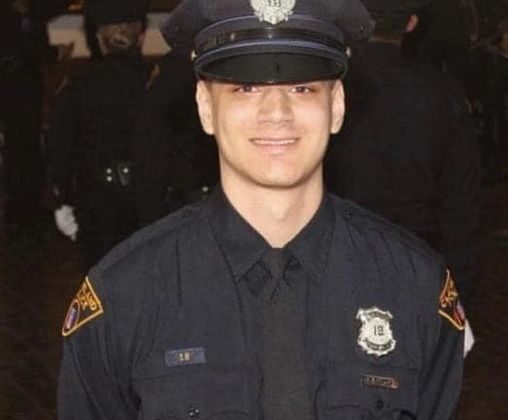 Cleveland police officer Shane Bartek. The 25-year-old officer died after being shot twice during a carjacking incident in Cleveland on Dec. 31, 2021. (Courtesy of Cleveland Police Department)
US News

The end of watch came for Cleveland police officer Shane Bartek the evening of New Year’s Eve, but thousands of people were able to pay their respects and say their final goodbyes on Jan. 11.

They spoke from the pulpit behind the 25-year-old Bartek’s flag-draped casket.

It was the church in the west Cleveland suburb that Bartek attended as a youngster; where he grew up a basketball and soccer buff, before wanting to become a police officer.  When he and Summer would play with their first set of walkie-talkies with his handle being “Peanut Butter” and hers being “Jelly.”

A video showing some of Bartek’s short life was filled with images of him with family, friends, and the trips he took. One showed a picture of his 6th birthday cake with a plastic police cruiser on it.

Bartek, who graduated from Berea-Midpark High School in 2015, had served in the city’s Fifth District since Aug. 21, 2019. He died at Fairview Hospital soon after being shot in the back twice during a struggle when he was being carjacked about 6 p.m. on Dec. 31.

He was off duty at the time, but the city recently ruled that Bartek was killed in the line of duty as he was acting as an officer trying to stop a crime.

“This is tough,” Schaeffer said. “This is like a bad dream. It’s a nightmare, one we would hope to wake up from, but death is real.”

But Schaeffer added that with death comes eternal life and that someday loved ones would have a reunion with him in the afterlife.

“Shane was a committed young person who did a lot in his 25 years,” he said. “He was a friend to many.”

The pastor told the story of a grandmother who came through the long line during Bartek’s visitation hours, just to thank the family and tell his mother Debra Bartek she raised a good son.

“Shane had recently responded to a domestic dispute where the woman’s grandson ‘was not in a good place,'” Schaeffer said. “After Shane got there he pulled the man aside. The woman said whatever Shane told him settled things down and changed his trajectory, and ‘I just wanted to say thank you for that,’ the woman told the family.”

In fact, Schaeffer said that Bartek made a follow-up call to that man on Dec. 31, hours before he was killed.

In addition to his sister, the fallen officer was survived by his mother, grandmother Gloria Bartek, brother Eric, and numerous other family members.

During her emotional eulogy Summer Bartek said she “promised Shane she’d get through it.” She was quick to say that although she was 13 minutes older than him she was always like the “little sister.”

“But he was wise beyond his years.”

In the days leading up to his funeral, Summer Bartek said she had heard about Shane, the brother, the son, the best friend, but she wanted to share stories about Shane, the twin, her idol, her hero.

“He was a leader,” Summer Bartek said. “I was the introvert with a little sass, and he was the one who could make a lot of friends. But, he always made sure to include me in whatever he did and made me feel a part of it.”

During one of her last conversations with him, Summer Bartek said she asked, “Aren’t you ever afraid on your job, afraid that something might happen to you?”

To which he responded, “Life’s too short to worry about things like that. I’m in a win-win (situation). I can be down here and spend a lot of time with family and friends, or if something happens to me, I can be in heaven with Dad, with the Lord, and all the other people who passed before us.”

Many of the pictures in the video showed Bartek with his father, Ron Bartek, who died in 2018.

“Shane said he most wanted to be remembered as a person who cared,” she concluded, “At the age of 25, he did that times a thousand.”

When Cleveland police’s Drummond spoke before the Bartek family and the many rank-and-file officers present he was stoic and direct. He said courage came naturally for Bartek.

“Shane had what it took to be a police officer,” Drummond said. “He was a true public servant. He had all the traits a police officer needed—kindness, trust, mercy, generosity, and honesty.”

Drummond also mentioned how Bartek often worked with the kids at the Apples of Gold Child Care 3 in Cleveland’s Collinwood neighborhood and played basketball with them.

To honor Bartek the children made a banner depicting things that he did with them that was displayed at the church.

“If I could create a template for what this city needs, it would be Shane Bartek,” Drummond said.

“Today, this day doesn’t seem fair and it never will,” the police chief said.

Two suspects have been arrested in connection to Bartek’s death and each is being held in the Cuyahoga County Jail on a $5 million bond.

Police believe that Bartek was approached by someone armed with a gun and a struggle ensued when Bartek tried to get the weapon away from her.

Both McLoyd and Butler were later arrested following a chase on the Cleveland’s east side after Butler crashed Bartek’s car into a fence, according to police.

It also is being discovered that McLoyd also was on probation for offenses as a juvenile in neighboring Lorain County.

It is not known whether the McLoyd and Butler are connected to recent carjackings that have happened in the Lakewood area in recent months.

Skernivitz, 53, and civilian Scott Dingess, 50, were sitting inside an unmarked vehicle when they were approached by three teenagers about 10 p.m. on Sept. 3, 2020, on the city’s West Side.

The trio was looking to rob someone of a gun and fired 17 shots into the vehicle, killing both men, according to police.

In a statement, Bartek’s family said it was grateful for the outpouring of support from the community and said “Shane would be missed forever.”

Liles’ sister Laurie has been a deputy sheriff in Florida’s Brevard County for 20 years and formerly served as a sheriff in Medina Township south of Cleveland.

“My sister was not able to make it up here for Officer Bartek’s funeral and I wanted to come on her behalf,” Liles said. “I’m so sad to see these young officers killed. He had just started his career and he was doing a good thing.

“I don’t know what the end game is going to be,” Liles added. “There’s so much divisiveness in the country. I’ve never seen anything like it in my life. I’m at a loss of words.”

“It’s a senseless tragedy,” the pastor said of Bartek’s death. “Shane lived a lot of life in 25 years. Going back to one of his last conversations with Summer, he was prepared for the afterlife.”