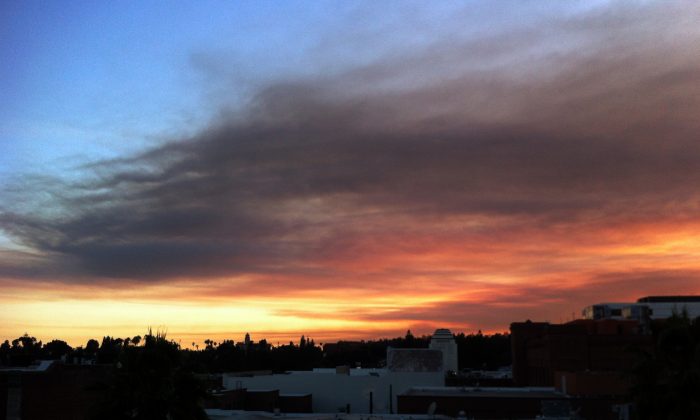 Smoke from a fast-moving brush fire sweeping through hills in Calabasas, Calif., northwest of downtown Los Angeles, is seen from Pasadena, Calif., some 40 miles to the east, on June 4, 2016. The blaze is one of several that erupted late Saturday afternoon in Calabasas and West Hills. (AP Photo/John Antczak)
US

Thousands Flee Wildfire Near LA as It Approaches Neighborhood of Kanye West, Kardashians

A car crash sparked brush fires in northwestern Los Angeles over the weekend, forcing thousands of people—including some celebrities—to flee their homes.

More than 500 acres had been torched as of Sunday morning, prompting hundreds of firefighters to respond to contain the fire. No serious injuries or deaths have been reported, NBC Los Angeles said.

“Nobody can sit in their driveways or sit in their houses and ride this out. They need to get in their car and evacuate immediately,” Los Angeles County Fire Chief Dennis Cross said.

Thanks to all the brave firefighters, on the ground and overhead. Appreciate what you do to keep us safe God bless #CalabasasFire

He added: “This is a fast-moving, dangerous fire. It’s hard for people to see where this fire is because of the dense canopy and the canyons.”

The wildfire broke out Saturday afternoon in the Calabasas part of Los Angeles, a relatively affluent area, home to a handful of celebrities, including Jessica Simpson and Toni Braxton.

Members of the Kardashian family also live in the neighborhood, which has a number of multimillion-dollar homes. Rapper Drake is also said to live there.

A video posted by Kylie Jenner Snapchats (@kylizzlesnapchats) on Jun 4, 2016 at 5:22pm PDT

Officials said Sunday that only three homes were damaged in the fire. Other buildings and a city park were burned.

“Three thousand homes are evacuated, which is about 5,000 people,” Tony Coroalles, the city manager of Calabasas, told CNN.

“If anyone is familiar with the area, we’re talking about very steep terrain, very limited access, very windy roads. This is very difficult for our apparatuses…they are very large pieces of machinery, they need a lot of room to operate…,” said Edward Osorio of the L.A. County Fire Department, according to ABC7.