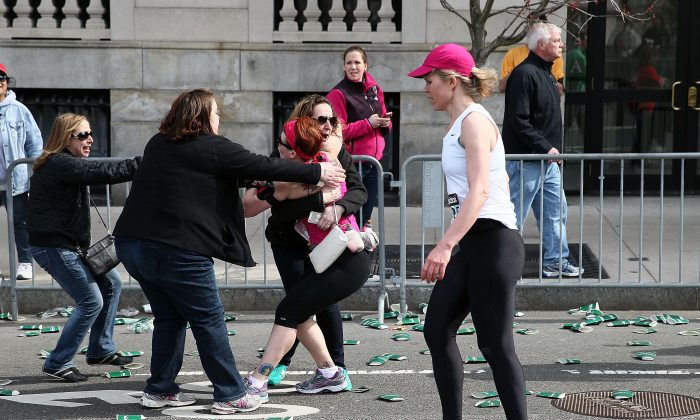 Thoughts, Prayers, and Support Pour in for Boston Marathon Victims

People are pouring in their support for the victims of the deadly explosions that killed 2 people and more than 120 being treated at local hospitals, according to numbers from the Boston Globe.

News reports said that some marathon runners ran straight to the hospital to donate their blood for the victims of the blast.

“Reports of Marathon Runners that crossed finish line and continued to run to Mass General Hospital to give blood to victims,” stated NBC Sports on Twitter.

As of 5:06 p.m. EST on April 15, there is enough blood on the shelves to meet the demand, according to a tweet from the American Red Cross.

“Thanks to generosity of volunteer blood donors there is currently enough blood on the shelves to meet demand. #BostonMarathon,” @RedCross tweeted.

It stated that connecting with loved ones is the best way to help.

Boston residents created a Google doc, offering Boston Marathon runners a place to stay, if they need it.

One man named Jerri lives in Westborough wrote, “I don’t live in the city—but can come get anyone who needs a place to stay.”

“We have an L couch to offer, one long section and a short section that can fit a smaller (5ft) person. Not much but we’re happy to help!” Michelle Zwi of Symphony wrote.

These are just two, of dozens and dozens of people, offering what they can to help; a place to rest. Each person has left their name, telephone number, email, city, and what kind of resting place they can offer.

“We are less than a half mile from the Marathon finish line in a South End brownstone,” wrote Brian Dacey. “We have a spare bedroom that could sleep two people in a queen bed for the night,”

For others not so close to the scene, social media platforms like Twitter, Facebook, and comment boxes are overflowing with people offering thoughts and prayers, sympathy, and mourning for the victims of the blast. “#PrayforBoston” is the number one hash tag on Twitter April 15.