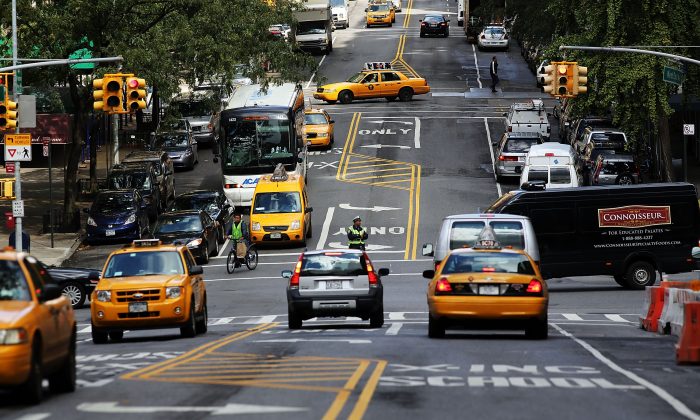 NEW YORK—Over the next few years, the city will release 2,000 new wheelchair-accessible taxi medallions, and if elected mayor, Bill Thompson wants to provide a better way to pay for them.

The price of taxi medallions has reached record proportions, with fleet medallions going for $1.3 million, and owner medallions fetching nearly $1 million at auctions. Investors or individuals without the up-front cash must go through private financing groups.

Thompson wants to see the city help out drivers looking to become owners. Announced outside of his Crown Heights campaign headquarters in Brooklyn, Thompson called for the city to defer half of the medallion costs for five years. The city would take a five percent down payment. The incentive would only be available for 800 of the 2,000 new medallions.

When asked what agency would take care of the loans, Thompson suggested the Economic Development Corporation.

Thompson said that to qualify owners would need to meet credit requirements, attend business counseling classes, and drive the taxi part-time. If a driver defaulted, the city would reclaim the medallions and resell them at market value, which could conceivably be higher the second time around.

Andrew Murstein, president of Medallion Financial Group, which finances taxi medallions, said the plans have the makings of success, but he questioned deferring 50 percent. In an email, Murstein suggested 25 percent “so that they [the city] gets as much money as possible upfront to help with their budget shortfalls.”

The city budget calls for $300 million in revenue in this fiscal year (which runs until June 2014).
“This plan is good for the lenders as our loan-to-values will be very low and very safe with the city taking back a note,” Murstein said in an email.

Thompson has come under recent scrutiny for campaign contributions from the taxi industry. A Wall Street Journal article reported Thompson took $50,000, mostly from the livery cab industry (which would not receive any benefits under this proposal).