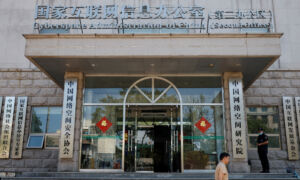 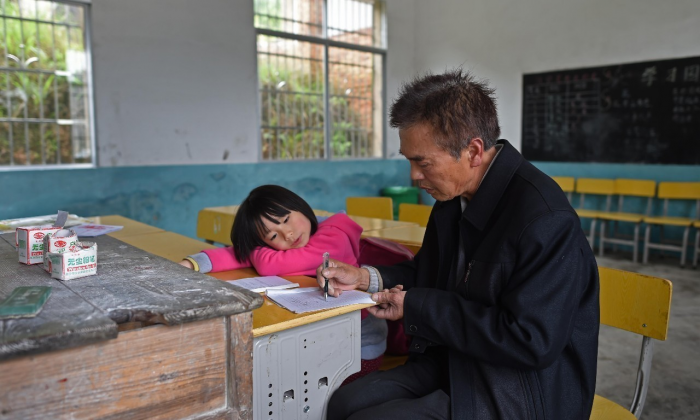 Peng, an 8-year-old girl with bangs, lives in a remote rural area of southern China, alone with her grandparents—her mother and father are far away at work in different provinces.

It isn’t just the parents who are gone. Peng, who is the only student in her grade, has seen most of the school’s thirty children leave with their families. Now there are just seven children and two elderly teachers left at the Wanjia Elementary School in Hunan Province.

It’s a pattern that is repeated across the country, as rural villages are hollowed out and parents, who can work, migrate to cities. Migrant workers comprise a vast demographic of Chinese rural folk who leave their villages, often in the hinterland, in search of income in the wealthy and affluent cities. There are over 200 million such people, who, because of China’s uniquely draconian household registration system, typically can’t bring their children with them.

“I had one classmate when I was in first grade,” Peng, who used an assumed name, told the state-run news agency Xinhua. “Now I’m in the second grade and it’s quite boring to be the only one in class.”

Peng walks 40 minutes either way from home to school. As one of China’s 60-some million “left-behind” children, whose parents spend most of the year working low-income jobs away from home, Peng only gets to see her mother and father during Chinese New Year.

Asked whether she misses her parents, Peng simply whispered: “Actually, I have good friends, too, but it’d be better to have classmates. It’s more fun to be in class together with them.”

Like Peng, the other seven children, as the children of migrant workers, have similar backgrounds: all live with their grandparents.

“I often feel that this could be the life most typical of our people, the most vulnerable people who need the greatest help from the state. But most people don’t seem willing to think about it, rather, they are fooled by the ‘average’ lifestyle portrayed on television and on the Internet,” one comment reads.

Peng’s grandparents, unlike some other families, are in no position to send their granddaughter to a better school.

“I am old,” her grandfather told Xinhua. “I cannot send her to a school that is further away, though I also know that she is very lonely taking class all by herself.”