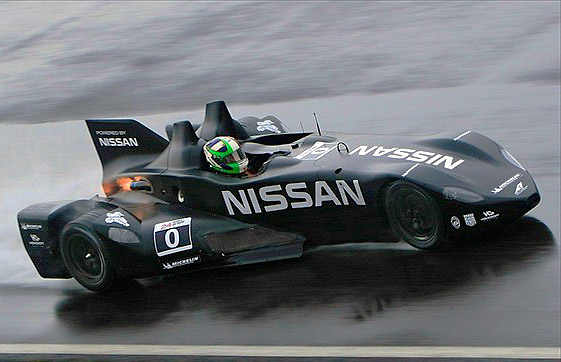 The revolutionary DeltaWing lapped Snetterton as fast as cars with twice the engine capacity. (Highcroftracing.com)
Motorsports

Motoyama started racing Nissans in 1996. He has won four Formula Nippon championships and three Super-GT titles. He currently co-drives the #23 Nissan GT-R with his DeltaWing copilot Michael Krumm. This pair won the JGTC (then called Super GT) championship in 2003.

Motoyama has endurance-racing experience. He drove for Nissan and at TRW Le Mans in 1998 and 1999, finishing tenth overall in 1998

“I am very excited about joining the Nissan DeltaWing project for this year’s Le Mans 24 Hours and would like to thank Nissan, NISMO, Ben Bowlby, Don Panoz, All-American Racers, the Highcroft Racing team and other partners involved in the project for giving me this great opportunity,” Motoyama said in a press statement.

“Nissan DeltaWing is very innovative and beyond any racing technical regulations; we will run in the discretionary “Garage 56” class at Le Mans, where no classification will be given. But there will be no disappointment and compromise, since our aim for this project is to prove this innovative racing technology and demonstrate the future of motorsports. It will be a truly challenging and exciting experience for me and the team.

“Along with Michael Krumm, my fellow partner in Super GT, and Marino Franchitti, I am really looking forward to driving the car at Le Mans, and showing everyone what Nissan DeltaWing can do.”

“I am even more excited about the Nissan DeltaWing program now that Satoshi Motoyama and Michael Krumm, the two best racers from the current Nissan NISMO SUPER GT squad, will drive the most innovative and exciting car at the French classic,” said Shoichi Miyatani, President of Nissan Motorsports International Co. Ltd (NISMO.)

“In the 2011 Le Mans 24 Hours, two out of three LMP1 winning drivers were regular Super GT drivers – Benoit Treluyer, ex-NISMO Super GT driver being one of them. Being the most successful current SUPER GT drivers, Satoshi and Michael will know how to be successful at Le Mans. As well as watching those LMP2 cars powered by Nissan and NISMO, I am also looking forward to observing how the Nissan DeltaWing will amaze everyone at Le Mans.”

The revolutionary DeltaWing, with no rear wing, tiny front tires, and a 1.6-liter turbocharged motor, was turning laps approximately on par with P2 cars powered by motors twice as large in testing at England’s Snetterton Track Wednesday. The crew will continue testing and fine-tuning the car at tracks in France and Spain preparing for the car’s June racing debut in the Le Mans 24.