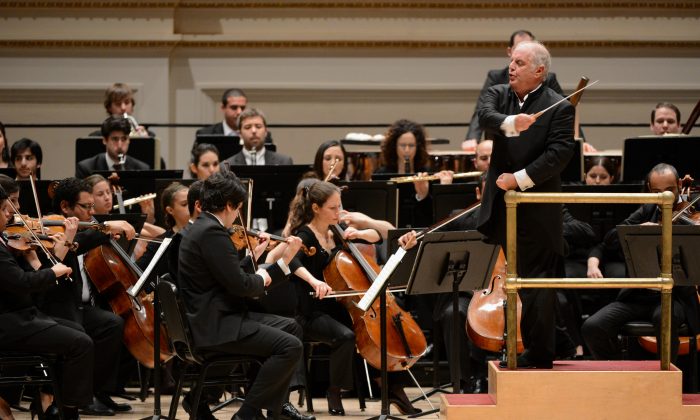 Things to Do Around NYC: December 2–8

Hanna and the Moonlit Dress
Dec. 2–18, Fridays at 4 p.m., Saturdays & Sundays at 10 a.m. & noon
The Theater at the 14th Street Y, 344 E. 14th St.
“Hanna and the Moonlit Dress” is based on the beloved Israeli book Hanna’s Sabbath Dress by Itzhak Schweiger-Dmi’el and is adapted for the stage by Ronit Muszkatblit and Yoav Gal. Hanna is a fantastical, interactive musical for children about the magic of a good deed. Directed by Ronit Muszkatblit, the cast features actors Case Watson as Hanna, Kate Mulberry as the Mother, and Matt Webster as Zuzzi the Dog, and the Coalman, under the music direction of Peter Hodgson. $18 or $50 per family. TheMoonLitDress.com

Pushing the Envelope: A Decade of Documentary at the Cinema Eye Honors
Through Jan. 8
Museum of Moving Image, Queens
Highlights from the Cinema Eye Honors’ first decade with a series featuring more than twenty films that have won or been nominated, along with a few key films released in the year before that inaugural Cinema Eye Honors award ceremony. MovingImage.us

Fragonard: Drawing Triumphant
Through Jan. 8
The Met Fifth Avenue
Jean Honoré Fragonard (1732–1806)—one of the most forward-looking and inventive artists of the 18th century—was equally skilled in painting, drawing, and etching. Unlike many old masters for whom drawing was a preparatory tool, Fragonard explored the potential of chalk, ink, and wash to create sheets that were works of art in their own right. $12–$25 suggested. METMuseum.org

Jerusalem 1000–1400: Every People Under Heaven
Through Jan. 8
The Met Fifth Avenue in Gallery 899
This exhibition will illuminate the key role that the Holy City played in shaping the art of the period from 1000 to 1400. While Jerusalem is often described as a city of three faiths, that formulation underestimates its fascinating complexity. In fact, the city was home to multiple cultures, faiths, and languages. History records harmonious and dissonant voices of people from many lands, passing in the narrow streets of a city not much larger than midtown Manhattan. $12–$25 suggested. METMuseum.org

Wrap Me Up: Winter Small Works
Through Jan. 20
Eleventh Street Arts, 46-06 11th St, Long Island City, Queens
Small, intimate paintings and drawings by 51 artists, including a couple of sculptures and over 100 portraits, landscapes, figure and still life paintings and drawings by highly skilled artists from the Water Street and Grand Central Ateliers. Prices range from $150 up to $9,500. Most works are priced around $2,000. eleventhstreetarts.com

The Yorkville Nutcracker
Dec. 8–11
The Kaye Playhouse at Hunter College, E. 68th St.
This year marks the 21st anniversary of “The Yorkville Nutcracker,” set in 1895, which includes lavish sets and costumes and takes the audience on a tour through Olde New York’s most beloved landmarks, including a holiday party at Gracie Mansion, dancing at the Crystal Palace in the New York Botanical Garden, and skating in Central Park. $45–$85. DancesPatrelle.org

Keith Michael’s The Nutcracker
Dec. 10 & 11 at 11 a.m., 1 p.m. & 3:30 p.m.
Florence Gould Hall, 55 E. 59th St.
New York Theatre Ballet returns for a sixth year of Keith Michael’s “The Nutcracker,” an enchanting holiday ballet. From clockwork imps to a luminous owl that flies above the audience, mice dressed in polka dots and dancers dancing with huge chopsticks, this timeless re-imagined classic bursts with energy and excitement. $24 for children, $34 for adults. NYTB.org

The Classical Theatre of Harlem’s The First Noel
Dec. 10–18
The Apollo Theater
The Harlem-based holiday musical makes an unprecedented move to the Apollo’s mainstage this year with an expanded cast. The musical features original music and re-imagined classic carols—ranging from pop to jazz to gospel—and follows three generations of a Harlem family affected by tragedy to tell a universal story of love and belonging perfect for this holiday season. $30–$65. ApolloTheater.org

Manon Lescaut
Through Dec. 10
Metropolitan Opera
Anna Netrebko stars in the title role, a heroine as alluring and irresistible as her adored city of Paris. Marcelo Alvarez is her obsessed lover in the opera that made Puccini famous, showcased in Richard Eyre’s heated,1940s film noir–inspired production, with Marco Armiliato on the podium. From $32. MetOpera.org

George Balanchine’s The Nutcracker
Through Dec. 31
David H. Koch Theater
Celebrate the joy and wonder of the holidays with George Balanchine’s “The Nutcracker” as Tschaikovsky’s iconic score whisks you away on a heartwarming adventure through the eyes of the pint-sized heroine Marie on her journey to a fantastical land made entirely of candy. $35–$285. NYCBallet.com

L’Amour de Loin
Dec. 1–29
Metropolitan Opera
Commissioned by the Salzburg Festival, where it was first seen in 2000, it will now finally have its Metropolitan Opera premiere in a dazzling new production by Robert Lepage, featuring glimmering ribbons of LED lights that extend across the length of the stage and over the orchestra pit. Eric Owens is the knight on a quest of love and Susanna Phillips is his lover on the other side of the sea. Conductor Susanna Malkki makes her Met debut. From $25. MetOpera.org

Amor Artis
Dec. 4 at 4 p.m.
Basilica of St. Patrick’s Old Cathedral, 263 Mulberry St.
Carols and motets from the medieval period and Renaissance up through the 21st century, including works by Victoria, Sweelinck, Britten, and Howells, along with beautiful arrangements for choir, harp, and oboe of favorites such as “O Holy Night,” “Silent Night,” “Auld Lang Syne,” and “Have Yourself a Merry Little Christmas” by Artistic Director Ryan James Brandau. $35 or $25 for students. AmorArtis.org

When Icicles Hang by the Wall
Dec. 6 at 8 p.m.
Loreto Theater at The Sheen Center, 18 Bleecker St.
Mirror Visions Ensemble (soprano, tenor, baritone and piano) was founded from a desire to explore the relationship between music and text, initially through the creation of “mirror visions”, which are settings of the same text to music by different composers. This particular concert features four “mirror visions”—four different settings of Shakespeare’s text “When Icicles Hang by the Wall,” including a world premiere by Christopher Berg. $17–$22. MirrorVisions.org

What Makes It Great? Shostakovich’s String Quartet No. 8
Dec. 12 at 7:30 p.m.
Merkin Concert Hall, 129 West 67th St.
The meaning of Shostakovich’s greatest chamber work, an emotionally wrenching piece he called his “ideologically depraved quartet,” has been contested for more than 50 years. Written in just three days in a white-hot burst of inspiration after visiting the bombed-out portions of Dresden, the quartet was officially dedicated to the victims of fascism and war. But did Shostakovich actually intend it as veiled criticism of Soviet rule meant to undermine the Communist regime? Or as a requiem for himself, a powerful testament to his own uniquely personal experience? Featuring the Attacca Quartet. $45. KaufmanMusicCenter.org

Storm Large: Holiday Ordeal
Dec. 19 at 7 p.m.
Feinstein’s/54 Below, 254 W. 54th St.
What better way to spend a holiday than with Storm Large (of Pink Martini fame)? Storm will love you, leave you, delight you and abuse you with wicked charm and stunning vocals that will have you begging for more. “Holiday Ordeal” is a night of music, gags, gifts and some very special guests, with songs ranging from “2000 Miles,” “Hallelujah,” “Sock it to Me Santa,” and the greatest holiday song never written for the holidays, “Somebody to Love.” $30–$60. 54Below.com