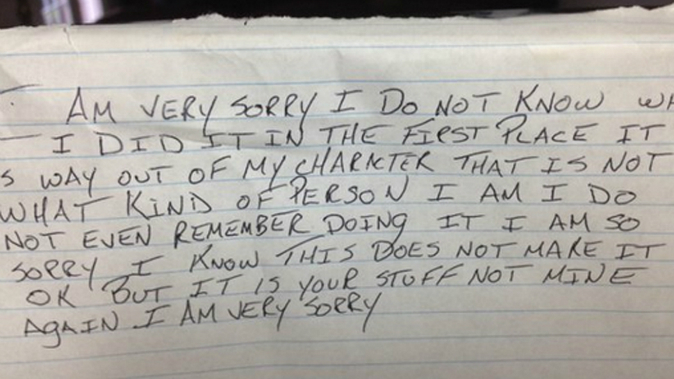 Thief Returns Stolen Items With an Apology: ‘It Is Your Stuff Not Mine, I Am Very Sorry’

The Franklin County Sheriff’s Office posted pictures of a man who left an apologetic note after returning a boat, booze, a TV, and other items from a Kentucky Marina.

Security footage captured the alleged thief, which was later posted on the sheriff’s department Facebook page on May 24. Shortly afterward, the items were returned.

According to CNN, the man stole a pontoon from the Frankfort Boat Club and took it down the river to pick up three of his friends. The group then boated back to the marina and broke into a few houseboats, stealing a flat-screen TV, bottles of liquor and other items, according to the sheriff.

They then left the pontoon and marina, CNN reported.

According to Sheriff Pat Melton, one of the alleged thieves went back to the marina on the night of May 23 and returned all of the items they stole from the night before.

Everything was apparently undamaged. The man also left an apology note.

The note read, “I am very sorry. I do not know why I did it in the first place. It’s way out of my character. That is not what kind of person I am. I do not even remember doing it. I am so sorry. I know this does not make it ok, but it is your stuff, not mine. Again, I am very sorry.”

Melton believes that the Facebook post played a significant role in the suspect’s return of the stolen goods.

“Our goal was to make it as hot as possible for them,” Melton said, “Just keeping that heat on. I’m sure their phones blew up saying ‘hey you all are caught.'”

Melton said returning the stolen items and writing an apology letter might possibly help the offender in court, but that doesn’t stop authorities from pursuing leads.

“To this individual and his three accomplices you better turn yourself in ASAP!” the sheriff’s department wrote on its Facebook page.

“The intent was there, and they still committed a crime,” Melton said.

So far, no arrests have been made.