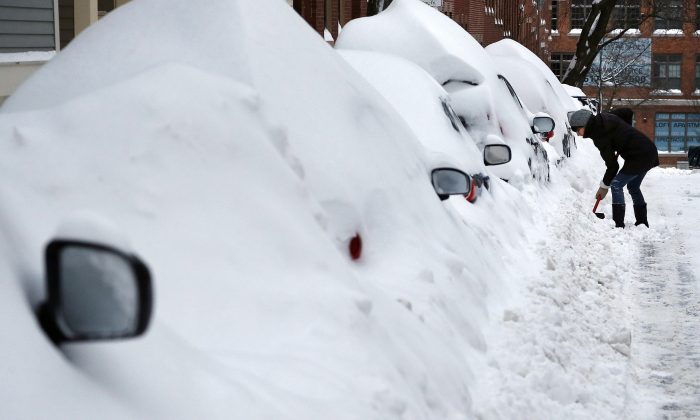 Jill Leach shovels her car out at her home in Boston's Charlestown section, Wednesday, Jan. 28, 2015, one day after a blizzard dumped about 2 feet of snow in the city. (AP Photo/Elise Amendola)
US

There’s So Much Snow in Boston, the City Might Dump it in the Ocean

As Boston continues to get hammered by winter snowstorms, the city apparently has run out of room to put the snow.

A record 60.8 inches has fallen in the past 30 days, according to local reports.

Mayor Martin Walsh says this is problem, telling the Boston Globe that the city might be forced to dump some of the snow into the Boston Harbor. The city’s so-called “snow farms” are filled up, he said.

“We’re going to explore the opportunity of putting this snow in the ocean,” Walsh told the paper. “We’re looking at that now because of the amount of snow we have.”

Edmund Coletta, with the Massachusetts Department of Environmental Protection, said the snow has become a hazard.

“Obviously, these are very much extraordinary circumstances,” Coletta said. “It’s difficult to find a place for it and keep the public safe. They are allowed to [dump snow in the ocean] . . . they just need to notify us.”

State agencies usually recommend against dumping snow into rivers or oceans. Snow that has accumulated in cities is generally mixed with chemically enhanced road salt, trash, motor oil, and other items or trash that have been discarded in the street.

“I don’t know if we’ll get environmental push-back,” Walsh noted. “There will probably be some concern out there, but we’re talking snow like we’ve never seen before.”

And on Monday, “Boston’s south shore continues to be pounded,” the National Weather Service’s Boston department tweeted, according to USA Today. “We are forecasting a storm total just in excess of 2 feet there.”

“In eastern Massachusetts, we are certainly looking for 18 to 24 inches before it’s all over,” National Weather Service meteorologist David Manning told USA TODAY. “It’s adding insult to injury given what the region has seen this winter.”