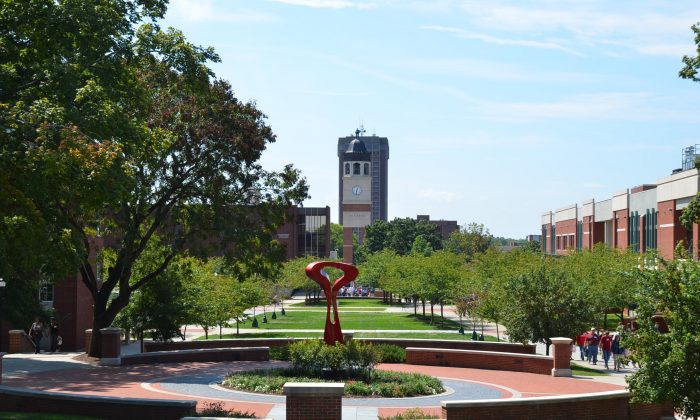 BOWLING GREEN, Ky.—When kids make poor choices, it’s easy for them to go down the wrong path without guidance. So, a Western Kentucky University theater program is attempting to intervene in the lives of local low-level juvenile offenders by allowing them to act out their experiences on stage.

“What we’re trying to do is to help build some really strong soft skills in the youth through the participation in this program,” said Jerry Daday, a sociology professor who helps organize The Patricia Minton Taylor Theatre-in-Diversion program.

Each spring semester, over a 10-week period, WKU students work with a group of 10 to 15 youth teaching them the basics of acting, along with guiding them as they craft their own production. The result is a showcase of skits, some funny and others more serious, starring youth who’ve committed low-level status offenses—such as truancy and underage drinking. Youth can chose to do this or other community service for a sentence.

Carol Jordan, an instructor in WKU’s Department of Theatre and Dance, runs the theater aspect of the program and supervises a group of theater students who work with the youth. It’s typically a choice for participants, she said.

“This is one of the few options that exists locally where they can actually do some sort of course or class,” Jordan said, adding it’s more in-depth than wiping down gym equipment or helping out at the Bowling Green-Warren County Humane Society.

After completing the program, the offender’s criminal record is wiped away. Jordan said they often go away feeling more self-confident and have healthier relationships and better friendships.

Putting together their own show can also be therapeutic, Jordan said.

“A lot of those pieces, it’s very obvious that students are working through issues and things that they are encountering in their own lives,” she said. “I think that that can be really powerful.”

This year’s production will feature skits focusing on animal abuse and raising awareness, a crime drama and runaway siblings who meet a mysterious woman down the road.

Diversion programs started as a response to heavy criticism of low level status offenses during the 1960s and 1970s, according to Robert Agnew’s “Juvenile Delinquency: Causes and Control.” Status offenses were often vague and exposed kids who hadn’t previously committed crimes to confinement in institutions where they could be physically or sexually assaulted. The response was the inception of diversion programs that tried to steer youth away from a life a crime instead of toward it.

Since WKU’s program began in the spring of 2012, Daday has worked with students to study its influence. WKU sociology students gather information by asking participants to voluntarily share their experiences with the program through interviews. Daday recently presented some of those findings to members of the Bowling Green Noon Rotary Club.

“The overwhelming pattern is the youth tell us that the program, above all else, helps them build confidence,” Daday said. “It helps them overcome the fear of public speaking and stage fright.”

Participants also report better teamwork, openness to other perspectives and self-reflection, he said.

Jessica Cundiff is a Louisville sophomore majoring in theatre and minoring in sociology. She also shared her experience with the program during the Rotary Club meeting.

“There’s so much reward out of just being there for someone and seeing them grow and become the person that you know they can be,” Cundiff told the Daily News before the meeting.

“The biggest thing that they get out of it from my perspective is a mentor,” Cundiff said. “A lot of these kids come from really, really rough backgrounds, and a lot of them don’t really have someone that cares about them.”

Cathy Pippin, a court designated worker with the Kentucky Court of Justice, said that although some kids are initially hesitant, they later warm up to the program. Some have even opted to go through the program twice, she said.

“It’s had a very positive effect on our kids,” she said. “They’re allowed to express themselves and create on their own.”

Program participants were unable to comment because their identities are kept confidential by the state.

Several local high school students, who are not affiliated with the diversion program, attended the Rotary Club meeting as part of a separate mentoring program through the club.

Dequantez Lewis, a Bowling Green High School sophomore, said the program could be good for kids and give them something to do other than criminal activities.

Bowling Green sophomore Jeremy Anthony agreed and appreciated that the program was a choice.

“Any time that you can intervene early in a young person’s life and just get them off of their path … it’s got to have an impact.”