Theater Board Member: ‘Most Unusual, Beautiful Thing I’ve Ever Seen’ 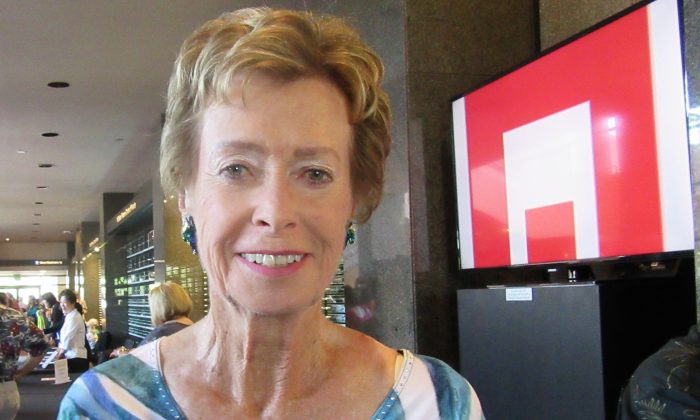 Diane Denkler, who was the first woman to graduate with an engineering degree from San Diego State University and is former chief engineer at PacBell, enjoyed the Shen Yun matinee performance at the McCallum Theatre in Palm Desert, Calif., on April 27, 2018. Mrs. Denkler serves on the board of the College of the Desert Foundation and the McCallum Theatre auxiliary. (Jana Li/The Epoch Times)

“This is over the top. It’s the most unusual, beautiful thing I’ve ever seen. And the choreography, the scenes behind it, … I feel like I’m in China and I just love it.”

“The backdrop is a significant part of it, but also the costumes, and everybody is so synchronized. Nobody is out of step, and it’s exciting.”

“[The dancers seem to] disappear in the backdrop, and then appear. It’s just the best. … The people coming from the picture, and then they’re on stage, that is just something that I’ve never ever seen before.”

“That’s very clear [that traditional Chinese culture is divinely inspired], with the Gods and the monarchs coming down, and then going back up and everything that happened in the clouds and all. The divine spirit is definitely part of this.”

“They’ve done a fantastic job to [revive authentic Chinese culture]. I just appreciate so much the effort of all these people.”

“If there’s that many performances, and it’s really becoming known, I think that it could very well have a very positive impact and hopefully bring some peace into the world.”

“I’m just thrilled, so satisfied, so grateful I came. It’s one of the most unusual things I’ve ever seen. I really appreciated it.”

“I’m overwhelmed. Everybody should see this. … Just gorgeous.”

“[My friends] really missed something, and I have the brochure that I will certainly keep and share with some of my closest friends, and maybe next year, or hopefully someday [Shen Yun] will come back.”