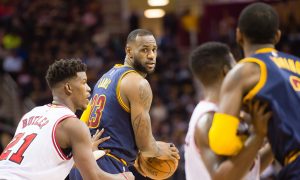 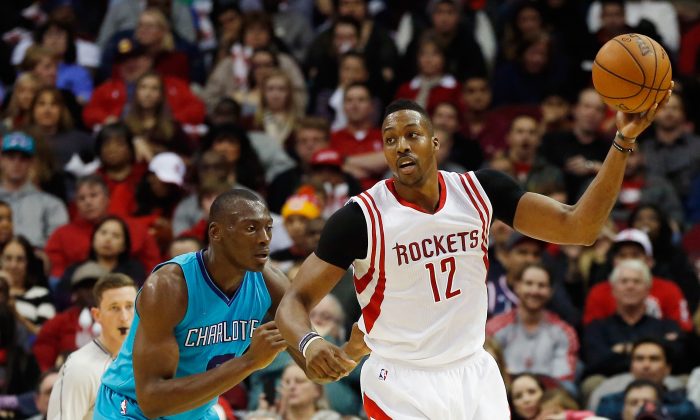 Dwight Howard of the Houston Rockets put up 28 points, 12 rebounds, and 2 blocked shots in a 111–99 win over Dallas Tuesday night while playing his most minutes since January. (Scott Halleran/Getty Images)
NBA

The X-Factor of the NBA Playoffs

Dwight Howard’s 28-point, 12-rebound, 2-block effort in Houston’s 111–99 win over rival Dallas on Tuesday night not only extended the Rockets’ lead in the best-of-seven set to 2–0 over ex-teammate Chandler Parsons new team, it also sent notice to the rest of the league that the once-limited, and still dominant, center is back and healthy.

And if Howard is finally 100 percent, Houston has a weapon few in the West (maybe Memphis’s Marc Gasol. Maybe.) can defend one-on-one.

Howard missed 41 games, half the season, with various knee injuries this past year and actually posted his lowest scoring (15.8) and rebounding (10.5) averages since his rookie season 10 years ago, while his 1.3 blocks per contest are his worst ever.

But the drop in production was mainly due to a strained knee injury that cost him 11 games in November and December. Then in late January, Howard went down again in a game against Phoenix with another knee injury. He underwent a bone marrow aspirate injection soon after and didn’t return to action until March 25.

The NBA’s Most Anticipated Series?

He’s played limited minutes in nine games since his return, thus hurting his per-game averages. Still, his per-36-minute numbers (19.0 points, 12.7 rebounds) are actually right in line with his career numbers at that rate.

Tuesday night Howard showed off a healthy knee, though, especially in the fourth quarter, when he was on the receiving end of four alley-oop passes from teammate Josh Smith.

It would appear he’s back.

Remember, in an era where there are very few true NBA centers, Howard was once the best, and at 29, he is still considered the most dominant—when healthy.

His accolades prove that. For five straight seasons from 2008 to 2012, the former first overall pick of the 2004 draft was an All-NBA first-team selection every year.

The last three seasons, his production has dropped in part due to injuries and usage. Back problems plagued him in Los Angeles in the 2012–13 seasons, and he was no longer the center of the offense with Kobe Bryant—not that he was a great fit for Mike D’Antoni’s up-tempo offense.

Previous to that, he led the Orlando Magic to four straight 50-win seasons, despite the average talent around him. In 2009, Howard anchored an Orlando lineup that included Rashard Lewis, Hedo Turkoglu, Jameer Nelson, and Courtney Lee—just three career All-Star appearances between the four of them—all the way to the NBA Finals where they lost to the Lakers in five. Howard put up an average of 20.3 points, 15.3 rebounds, and 2.6 blocks per game during the playoff run.

Now in his second season in Houston, Howard may have his best running mate ever in 25-year-old James Harden. (Remember Kobe Bryant was 34 when Howard teamed with him in L.A.)

Harden averaged 27.0 points, 7.0 assists, and 5.7 rebounds per game this last season and is well on his way to his second straight first-team All-NBA selection.

It’s like what Harden said early in the season—that offended Parsons. “Dwight and I are the cornerstones of the Rockets,” said Harden, while appearing at a charity event in the Philippines, according to The Philippine Star. “The rest of the guys are role players or pieces that complete our team. We’ve lost some pieces and added some pieces.”

“I think we’ll be fine next season,” he added.

As long as Howard is healthy.