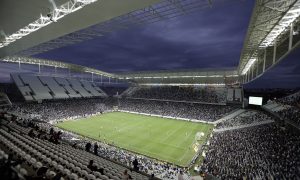 What Is the World Cup Worth?
0
Share Now
TelegramFacebookTweetEmailTellMeWeReddit
Copy Link 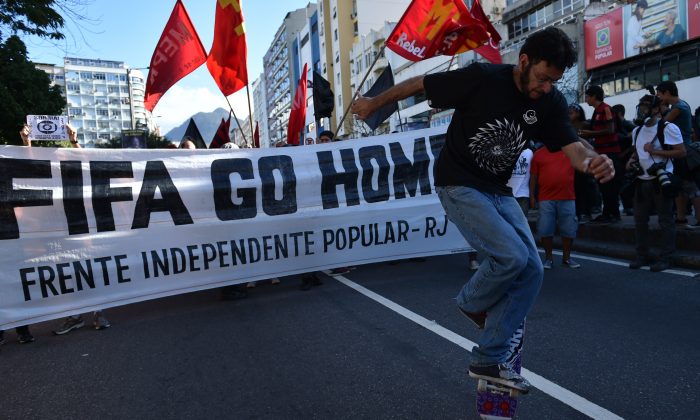 The World Cup Spilleth Over

As the soccer games end, political ones begin

The World Cup has spilleth over. With the FIFA spectacle packing up its goodies—most of its lucre has already been wired out of Brazil—it’s time for hype for the next global spectacle, as the “host” country now tries to cope with its financial losses, intensified social conflicts, and humiliating defeat at the hands of the Germans after earlier losing their star player to a nasty collision on the field, and their valiant captain to a penalty.

On a symbolic level, Brazil’s bashing at the feet of Germany using bum rush tactics compared to the Nazi “Blitzgrieg” brought smiles to Old Europe, and pain to a nation struggling with massive poverty and inequality.

In a way, it underscored the dependence and anger that so many Brazilians felt, even as the issues they have raising and marching to call attention to, have been all but ignored by the sportscasters who know game scores but not the scores of life—the great gaps that events like the World Cup paper over.

We saw this movie before, just 4 years ago, in South Africa where warnings of corrupt practices and unreasonable demands by FIFA—to have companies they pick build unwanted and unneeded stadiums, and control all TV rights, among other “requirements” insuring it controlled the events and made the most money—were lost in well-orchestrated patriotic fervor to bring the games to Africa for the first time.

South Africans were persuaded after years of struggling for freedom that they had finally arrived in the big time.

In the end, FIFA made more money off the games in South Africa than in any earlier World Cup. There were plenty of photo ops and mutual congratulations, but, afterward, the county was left with a large debt and white elephant stadiums, like the one in Cape Town that some critics want to turn into a low-income housing project in a “Mother City” known for its shacks and packed slum-like townships.

At the time, South African media turned down a powerful documentary forecasting these problems. To the ANC, the ruling party, the FIFA party was the one to embrace even as fans brought their own invention, to the games—wailing horns that expressed both joy and disquiet.

Called the vuvuzela, it produces a traditional loud monotone note that was barely tolerated by FIFA officialdom because it was seen as disruptive, interfering with its marketing and all the selling that was going on.

South Africa’s two-week mother of all parties soon gave way to a reality sandwich in the form of a debt that may take decades to pay.

They didn’t expect to win the cup—the Brazilians did. It would have been their sixth. Thus, the loss had profound psychological repercussions, as Doug Foster reported in The Atlantic:
“The loss had been treated as a national catastrophe akin to defeat in war. The writer Nelson Rodrigues even claimed that it was a kind of psychological cataclysm, creating an inferiority complex, one infused with racial stigma, in the population. Since Uruguay had fielded a largely white team, he noted, while Brazil had been represented by seven Afro-Brazilians, including the goalkeeper, the loss provoked a color-coded experience of shame. He called it “complexo de vira-lata”—the mongrel complex.”

In many ways, reaction there to the Cup became an expression of a deep class tension that annoyed/inconvenienced the tourists, with as much conflict in the streets, however downplayed by the world media, as competition on the field.

Just as the TV coverage reduced everything to numbers, so did sports writer Dave Zirin of the Nation:

“Here are some other numbers that will have much more bearing on both Brazil’s present and future. These are the numbers that animate far more debate and discussion inside of Brazil than the U.S. media, with their view from Copacabana beach, have portrayed.

“$11 [billion]–14 billion. That is how much the World Cup is going to end up costing the country. No one in government, when asked, is actually even sure as to what the final bill is going to be. This is not unique to Brazil by any means. Mega-events produce this kind of economic uncertainty and graft wherever they nest. But in a country where health and education are pressing issues, it stings.

“250,000. That is the number of people—overwhelmingly poor—who may be displaced by the time all the confetti has been swept away. Many of those losing their homes live in Brazil’s favelas.

“These communities, under constant attack by real estate speculators and the military police, have formed the backbone of Brazil’s urban culture for over a century. Several of these communities have been under military occupation during the Cup leading to brave, albeit uncovered, protests far from the public eye.”

Carl Gibson, a co-founder of US Uncut, a nonviolent grass-roots movement, writes: “When Brazilians tried to exercise their right to nonviolently protest the outright corruption behind the World Cup, they were met with riot police and tear gas canisters. On the eve of the World Cup’s first round, Brazil’s transportation workers went on strike in Sao Paulo, essentially shutting the city down. Unions were hit with a $27,000 fine for each day of the strike, which was called off a day later. City officials marked homes for demolition to make way for tourist accommodations without even contacting homeowners. …

“All of these injustices were inflicted with the intent of an anticipated World Cup win overshadowing the inequities. The Brazilian government was banking on the forgiveness of the people for their corruption and scandals surrounding the World Cup in exchange for a 6th title. Instead of the trophy, all the Brazilian people have is a demolished, dispirited national team.”

As politics increasingly becomes spectacle with the media all too happy to cash in by sucking up the advertising dollars that comes with big sporting events, these issues are buried with distracting images of beauties in bathing suits. TV directors now go for what they call the “honey shot” to showcase pretty girls in the stands.

There’s plenty of intercutting done to create a sense of tension—and nailbiting by fans, with a continuing focus on gladiatorial physical contact on the field, the more hurtful, the better.

It all goes back to the “Wide World Of Sports” format invented by Roone Arledge for ABC that turned sports into shows adorned with these stirring words: “The thrill of victory … and the agony of defeat … the human drama of athletic competition …”

Today, that network offers apps to give fans more digital choices and reruns. As license fees escalated so has the cost of advertising. ESPN is now a brand to sell brands in the increasingly commercialized sports world that started as amateur events where athletes competed for fun and glory, not obscene salaries.

Forget the impressive ideals of global harmony. Ratings and revenues are the driver with minimum attention paid to celebrating diverse cultures or teaching the world about the world. No wonder there is so much unreported corruption on all sides. The World Cup does not belong to the world.

News Dissector Danny Schechter works on Mediachannel.org and blogs daily at newsdissector.net. His latest book is Madiba A-Z: The Many Faces of Nelson Mandela. Comments to dissector@mediachannel.org.