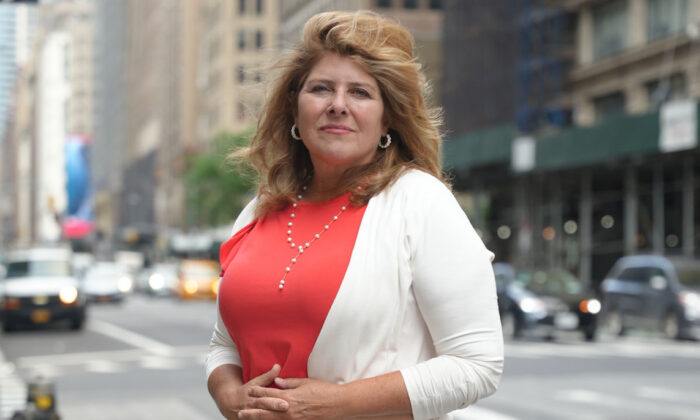 Naomi Wolf, author of “The Bodies of Others: The New Authoritarians, COVID-19 and the War Against the Human." (Ruilian Song/The Epoch Times)
US Features

The War on Humanity

In a recent episode of “American Thought Leaders,” host Jan Jekielek and Wolf discussed Big Tech’s role in the pandemic, the erosion of American freedoms, and ways to counter these attacks on our Constitution and on our way of life. Her latest book is titled “The Bodies of Others: The New Authoritarians, COVID-19, and the War Against the Human.”

Jan Jekielek: A major thesis in your book is that we in free societies have started behaving more like people in unfree societies.

Naomi Wolf: A year ago, we were in a freer America than we are now. President Joe Biden in April declared an extension of emergency law, and, for the first time, his declaration is without an ending date. At least 22 states are under emergency law. In another of my books, this is what I call step 10, the last stage of the closing down of a democratic civil society.

The pandemic provided cover and a pretext for a handful of bad actors such as the Chinese Communist Party (CCP), the World Economic Forum, and tech companies to exploit the crisis to reengineer our democracies, especially the United States. This is a targeting, not just of our Western freedoms, but also of our culture, specifically our families and our children.

I wanted to tell that story as well—the human side. My husband and I, for example, were excluded from gatherings because we aren’t vaccinated. Friends of mine who would never discriminate against someone on the basis of gender, sexual orientation, or race were happily embracing a discrimination which labeled some people as clean, valuable members of society, while ostracizing the unvaccinated.

I also tell the stories of friends and neighbors, like restaurateur Paul in Boston who was struggling to keep 20 workers’ families fed when the board of health wouldn’t let him open up, and the waitress at the local diner, a single mom, and her son having to come home from college, through no fault of her own. The American dream was closing for small business owners, landlords, mom-and-pop shops, and other hard workers.

Suddenly, no matter what they did, they couldn’t survive, compete, or protect their families and livelihoods.

Mr. Jekielek: One thing that fascinated me was your take on Big Tech involvement.

Ms. Wolf: One of the buzzwords of the tech industry is “disruptive.” That isn’t a negative. It’s usually considered a high compliment to say that someone has created software or a digital process disruptive to an industry.

That’s the context for understanding one of the core revelations in “The Bodies of Others.” Tech companies had an active hand in shaping legislation and in presenting the drama of COVID and lockdowns to us. They also presented the vaccine rollout so as to change human behavior and human society.

When you understand that Big Tech companies are competing with human beings gathering in human spaces, you understand why there was a vested interest in suppressing human assembly. Because when you’re a tech company, you can’t really compete with humans. When humans gather to worship, a digital platform can’t compete with that. When they gather in person in a town hall, they can create outcomes and solutions much more efficiently than they can in even the best Zoom meeting.

So one thing they want to disrupt is human assembly. Every time you shop at your local baker, and you chat with your neighbors afterward in a café, no money is being made by digital technology companies. When you’re at school or worshipping in church, they aren’t making money.

But if you can disrupt all of that, lock people in their homes and drive them onto their screens, then you’re harvesting money in multiple ways. There are really only three basic business models for most software companies: eyeballs, meaning your attention; subscriptions, meaning a paywall; and your data, which they’re harvesting as you’re surfing the web. There are vast marketplaces for selling your data; when people gather with their friends, none of that is happening.

So businesses like Amazon went up 20 to 25 percent in net revenue, as did Google, Microsoft, and Nintendo in the two years from 2020 to 2022.

Vaccine passports are the current gold rush. The tech companies have hit their limits of growth being in your computer, but the human body isn’t yet fully colonized by digital technology. If you can create laws to compel people to have vaccines, be in a vaccine registry, and require a vaccine passport to access activities like commerce, schooling, and public transportation, you can switch people’s access on and off through their vaccine passport. It compels you to ask permission of technology to be human.

Bodily autonomy is a basic human right of any real democracy. You get to decide what happens to your body. That’s just a fundamental right from the First Amendment, the Fourth Amendment, the Constitution, HIPAA [Health Insurance Portability and Accountability Act], ADA [Americans with Disabilities Act], the Geneva Conventions, and the Nuremberg Code.

Until recently, we were a decent, inclusive culture that respected people’s boundaries and freedoms. Now we tolerate a CCP-style cruelty, not at the level of China, but far beyond what free societies are supposed to tolerate.

Mr. Jekielek: And a significant number of people are actively engaged in the cruelty. If I were to say this even to some folks I know well, they might say: “You’re crazy, Jan. What are you talking about?”

Ms. Wolf: I know what you’re talking about. This is one more kind of splintering. In a way, America is now divided based on what news you consume. People I love and respect who read The New York Times and watch CNN and MSNBC are being lied to every single day about the vaccines and the pandemic.

Some have spoken about mass formation psychosis. People in that bubble I just mentioned say things like, “Don’t show me that primary source documentation.” But thank God there’s the other half of the country. That half of the country is conservative and libertarian, and they follow a lot of independent media. Conservative media has been a lot better on these issues, and also, The Epoch Times.

There’s also one more division in this country: the weaponization of the pandemic as a propaganda device. It didn’t play on excluding and hating another person for their color, race, or religion. What’s so demonically brilliant about this propaganda is that it was altruistic.

People asking questions or gathering or worshipping were cast as ignorant, infectious, and selfish. This brilliantly upended American culture, because it cast freedom as selfish, whereas a kind of CCP-style groupthink, submissive to authority and the community, was defined as altruistic and good.

Mr. Jekielek: What can we do?

Ms. Wolf: As I say in the book, one thing that feels so wrong is that we’re Americans, but we’re now expected to behave more like people in a tyrannical society. But I’m also heartened, because when you understand what’s coming at you, you can strategize a lot better.

There are many things we can do, and one of them is just practical. My company, DailyClout, hired a lawyer, and we drafted legislation called the Five Freedoms Bill. Besides addressing opening schools now, the bill calls for no mask mandates, no vaccine passports, no emergency law, and freedom of assembly. We passed variations of those bills by working with state legislators in 33 states.

America is freer than Canada, Australia, Britain, and Europe right now, largely because of actions like those.

But the most important thing, in addition to understanding what’s coming at us, is to assemble.

There’s a weakening of resources when people are kept apart. But when we gather in town halls, when we invite friends or neighbors over for a potluck, then we can coordinate. Already there’s this incredible grassroots resistance I describe in “The Bodies of Others,” groups like Moms for Liberty and the Front Line COVID-19 Critical Care Alliance. Left and right are coming together at a grassroots level, saying, “We have to save our Constitution, our freedoms, and our kids.”

A lot of people want the United States to fail. The smartest thing they can do is keep us apart from one other, from bonding the way we used to bond. That’s all the more reason to put down your digital device, restart all the volunteer organizations and community centers in your neighborhood, and take back this country.

America was a beacon to all nations, and that’s what they’ve tried to kill off. We need to lay claim once again to our country, our culture, and our founding documents.